FIRE ON THE MOUNTAIN, LARGE FIRES IN FLOYD COUNTY

Over half of Ky. counties have outdoor burn bans in place, but not in Lawrence

Forestry official: 810 acres have burned in Floyd in the past week 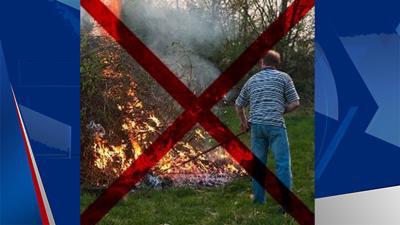 Arson is the suspected cause of a forest fire that destroyed nearly 700 acres in Floyd County’s Betsy Layne area this week.

Jason Hunt, an environmental control supervisor with the Kentucky Division of Forestry’s branch in Hazard, reported a fire, located about three miles north of Betsy Layne on an old strip mine, has burned about 654 acres since Sept. 13.

He said 31 forestry officials have been on site there this week battling the blaze, and, with weather changes, the number of officials dropped to one crew. He said a person or person set at least 100 small fires on the former strip mine, causing a large blaze that, as of Thursday, had destroyed 654 acres.

“It was arson, just somebody going around setting fires,” he said. “We had at least 100 areas set.”

Hunt said the investigation into this fire is ongoing. He reported officials saw a lot of ATV riders on the property this week.

As of Wednesday, this fire was the only active one in Floyd County, but Hunt said Since Sept. 13, 810 acres have burned in the county.

Floyd County Judge-Executive Robbie Williams issued a burn ban in Floyd County on Monday. On Tuesday, he told people who attended the fiscal court meeting that officials will have a “zero tolerance” policy toward any person who burns something outdoors.

Hunt previously reported that Floyd and other Eastern Kentucky counties usually rank in the top five, statewide, for the number of fires set by arson or by the burning of debris each year.

In Aug., the Kentucky Division of Forestry reported that there had been about 444 wildland fires across the state, damaging 5,600 acres. On Sept. 2, the agency reported there has been 456 fires that have burned 5,695 acres.

Hunt encourages any person who witnesses arson to call 800-27-ARSON.

Outdoor burn bans issued in half of state’s counties

Officials have banned outdoor fires in a little over half of Kentucky’s 120 counties because of dry conditions.

Little rain has fallen in many parts of the state during the past three weeks. The state Division of Forestry says it’s not safe to set outdoor fires in much of Kentucky until measurable rainfall is recorded.

Burn bans are currently issued in these counties: