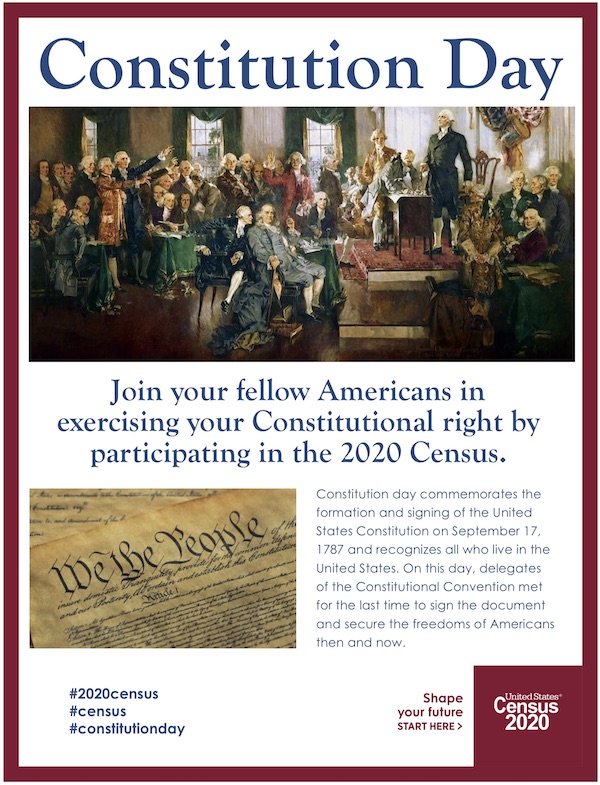 The founders of our early nation had a bold and ambitious plan to empower the people over their new government. Each state would be equal in the Senate, but the House of Representatives would be all about the numbers.

“Representatives and direct Taxes shall be apportioned among the several States which may be included within this Union, according to their respective Numbers…” was enshrined as Article 1, Section 2 of the U.S. Constitution on September 17, 1787. This passage established the first national census that would be used to empower its citizens rather than tax or conscript them into military service.

“The actual Enumeration shall be made within three Years after the first Meeting of the Congress of the United States, and within every subsequent Term of ten Years, in such Manner as they shall by Law direct,” the paragraph adds. They accomplished that goal in 1790 and our country has every 10 years since then. And we will again next year.

For that reason, this Constitution Day, communities across the nation are recognizing the significance of the U.S. Census to our form of representative democracy.

Kentucky just missed the first national census, joining the union in 1792. In the 1800 census, Kentucky’s population was just 220,959 compared to 4.339 million in the 2010 census. Kentucky’s ties to the census are strong, and the U.S. Census Bureau has opened temporary Area Census Offices in Lexington and Louisville to support 2020 Census operations throughout the state.

“Kentucky has long been an important part of U.S. Census Bureau history and we always know we can rely on our partners here to go above and beyond in supporting the census,” said Michelle Archer, Assistant Regional Census Manager. “We are proud to count the Kentucky Community and Technical College System, the Kentucky Extension Homemakers Association and Kentucky Youth Advocates among our partners in ensuring we count everyone in 2020.”

In recognition of Constitution Day, organizations across the state will host 2020 Census events celebrating Constitution Week in Kentucky.