GROWING UP IN LOUISA: Old Cars

It’s kind of a funny thing, you know. I have never seen myself as a ‘car guy.’ What I mean is cars to me were always just a means of getting from one place to another. In my mind they weren’t something all that romantic unless you considered those of a generation or two older. I know that most boys, at least, really dug muscle cars, but they weren’t high on my agenda. Oh, I was happy enough when Johnny Bill asked me to ‘double-date’ in his dad’s car, or when I went out with someone who had a car. The kind of vehicle didn’t really matter. It was the date, or venue that mattered to me. Many of my classmates got all excited over this muscle car or that one. I noticed differences in body 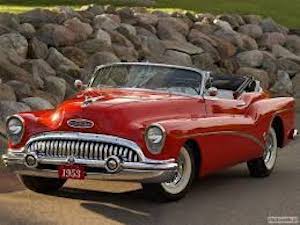 styles and appreciated their sleek designs. I liked the noise they made, but frankly I knew nothing about the things ‘under the hood,’ nor did I particularly care. So long as it worked I was happy. I didn’t like racing and saw the dangers inherent with that. I never grew to adore the muscle cars my sons and grandsons now love. One son owns one that he garages and polishes, but rarely takes on the road. I prefer the older cars with their particular body styles.

I was happy for those who had cars, but I didn’t really envy them. It was enough that they had one. As for me, I didn’t. I had nothing beyond some little tin toys cars that lived in a toy box stored away somewhere. Even those were of older models. Since not having a real one was a fact and I didn’t have the means to change that, I determined I would not focus on such things. It became a mental mechanism that allowed me to not wallow in self-pity, but rise above it all in a rather snobbish kind of way. If I couldn’t have one then cars simply didn’t matter.

It was a few years out of high school before I got my driver’s license or my first car. Even then, in 1963, the only car I could afford was an old 1947 Pontiac, fast-back, straight-eight, one-owner, and two-door sedan. BORING! The one thing really good about it was that it got me on the road. Now, I wish I had those old bones back sitting in my garage.

One of my favorite past times these days is watching period English murder mysteries. One of my sons gave me a complete DVD set of Agatha Christie’s Hercule Poirot. I try to watch one on most nights of the week and am on my second trip through a list of sixty-some episodes. It was hard on me when I watched that final one. My hero died in an episode called, fairly enough, ‘Curtains.’ My dear wife of 43 years joins me to watch them. We often point out to each other the beauty of the vehicles used in the dramas. Of course we see period Bentley’s and Rolls Royce’s, but other models pop up throughout, like Austin, MGA’s, Jags, and even a Ford! Now this is the kind of car I can really get into, literally. 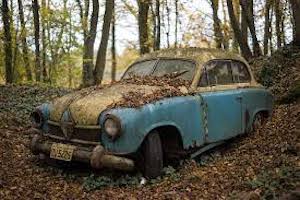 I remember a few times as a young boy, coming across various autos, called ‘survivors,’ that were left in a garage or barn. Sometimes they were up on blocks, sometimes they were left rotting on the dirt floors. Even then, it was romantic and as fulfilling as a beefed up muscle car would be to someone else. Just as interesting, I note that the prices (value) of such cars easily compete with the gas-guzzlers of my high school days and the years that followed. How cool it must be when the heirs of a family estate discover the value of beloved vehicles long forgotten. I’m sure some have appreciation for the relicts, but many are all too ready to offer them up to the junk dealers. Crushing one of those is such a loss to history.

There are websites galore that promote, list and sell, or give the histories of those icons of the past. Names like Stutz Bearcat, Cord, Pearce Arrow, Stanley Steamers, etc., fly off the screen inciting a rush in me not unlike Christmas morning. When the pictures of restored, or survivor autos, fill the homepage with the promise of even more to follow I consider it eye candy. Later models like Studebaker, Desoto, Nash, or Metropolitan are rare, too, but can sometimes be located. There is always hope I’ll stumble upon one I can afford. Who knows? 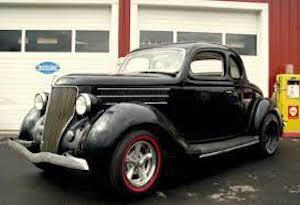 When I watch American Pickers and see Mike and Frank uncovering the chassis of a ’32 Ford, or a rusted body left out in the weather, I envision myself helping with the grunt work so this wonderful relic can be restored and put back on the road. Many car addicts fight for the chance to turn these bodies into ‘hot rods.’ I’m told that is where the real money is, but I’m the guy that wants it as close to factory ‘new’ as possible. I want to imagine myself in that wool upholstered seat and hitting the road to see the wonders of America. I can even imagine dressing in vintage clothing for the trip, and like the Great Gatsby become a member of the elite; the rare ones in that day who owned a horseless carriage.

The car ads of that day display things I mostly only saw in pictures, or that were nailed to some wall of a shack to stop the infiltration of cold air. The ladies of the 20’s and 30’s wore slink dresses and the men were in tuxedos. People were investing wildly in the stock market and emulating the movies stars as they sipped champagne. Those were the days before or during the great depression, but many of the vintage cars were still on the road. I saw many of the models that were leftovers that plowed the narrow streets of town. A lot of folks in our community couldn’t afford to replace the old models. Even if they could, the ‘ole Betsy’ would be passed down like a pair of old shoes. In other cases they were assigned to a spot in a ‘lean-to.’ Pity the one left out to weather.

I met a man once who lived in the Columbus area that had a factory that built fire trucks. His hobby was to seek out old derelict cars and restore them to their former glory. He specialized in fixing up Mercedes models, which are a bit hard to find in the U.S. One restored car that he showed me had been found in Texas, upside-down in a stream bed. The story goes that a wealthy oil man had bought it for his son’s high school graduation gift and the boy had promptly driven it off a bridge into the water the same night. The car had very few miles on it, but had laid in the creek a long time. It took my friend nearly a year to restore it. He pointed out that it had been a convertible, but he had to make it a hardtop to make it work. Then he added a fabric cover that made it look like the convertible it was when it was new. 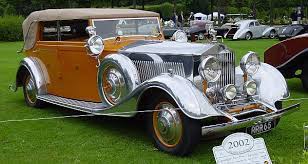 As Suzie and I watch our movies we often say that this car or another would look really good in front of our house. Since the family home is yellow, this one would especially fit in. Besides the crazy costs, my only other issue is whether we could keep it shining and pretty. It would be a shame to let something go to rust. I don’t have the skillset to treat them properly. Sadly, I can only attend an occasional vintage car show, or go to a museum to visit with one of these beauties. I’m not going to buy, but just look, enjoy and remember. When I see the dashboards, running boards, or other parts, my mind goes back to other days. Sometimes memories flood my mind and I see things I had forgotten. How wonderful. Seeing them also brings books and movies to life.

I remember as a child finding a few old barns or garages and seeing wonderful things under dusty tarps, or pushed hiding in a stall. There they were surviving regardless of how our world had changed.  Likely, the old vehicles were the prize possession of a husband long departed, or a son that didn’t return from the war. I saw buggies, wagons, Model T’s and Model A’s, and other relicts waiting to be given new life.

The thing I like to think about are the stories these machines could tell if they could talk. That thought is leads me into day dreams of other days. The old ones and the history is romantic to me. They make me fall in love again. It’s the history they experienced as they drove through time taking their drivers on adventures we can only dream of. I like to think of it as an extension of what Roy Rogers sang about, “Happy Trails to You.”   mcoburncppo@aol.com