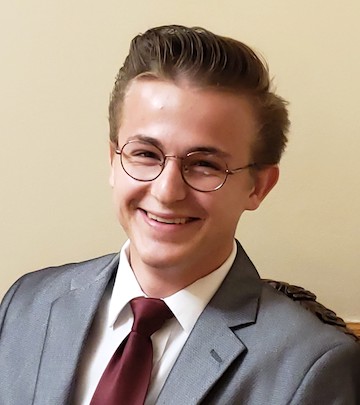 Louisa, KY — September 13, 2019-Young Funeral Home is pleased to announce the promotion of Will Skaggs to Funeral Director and Embalmer Apprentice. Will’s apprenticeship was approved by the Kentucky State Board of Embalmers and Funeral Directors on August 13, 2019.

Skaggs has worked for Young Funeral Home since August 2018 as an Attendant. Working in the Funeral Home in this capacity, he decided he would like to further his career and become a Licensed Funeral Director and Embalmer.

“After losing my mother at the young age of 3, I know the impact a Funeral Director can have in your life. I hope in my career I am able to help families in their time of need. My family is deeply rooted in Lawrence County and I am honored to serve the people we know and love.”

Skaggs is married to DeLaney Wireman-Skaggs, formerly of Magoffin County.  He is the son of Brad and the late Cecily Jackson Skaggs. His grandparents are William and Beverly Jackson of Louisa and Thomas “Terry” and Garnett Skaggs of Martha. Will is a 2018 graduate of Johnson Central High School.

Founded in 1947, Young Funeral Home is Louisa’s oldest funeral home still in operation. Located at 201 West Main Street, Louisa, KY 41230, we are in the heart of downtown Louisa. For more information, contact Sonya Patrick at 606-638-4521