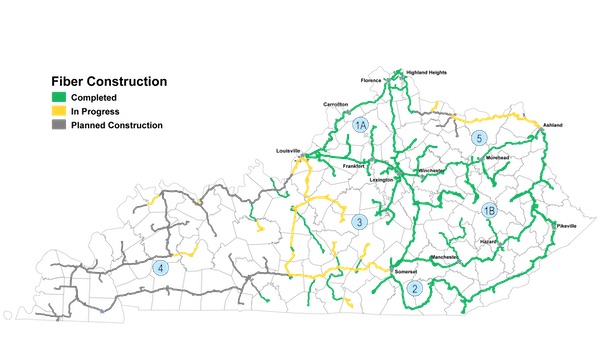 “Today, we are excited to announce the continued forward progress of the KentuckyWired project under our administration,” said Gov. Bevin. “With construction of the 1B and 2 rings complete, Eastern Kentucky is poised to benefit from the economic opportunities and growth that are possible with access to high-speed broadband. I am grateful to Congressman Rogers and the entire KentuckyWired team for their tireless work to bring broadband access not only to the 39 Eastern and Southeastern Kentucky counties in the 1B and 2 rings, but to the other 81 Kentucky counties as well.”

Today’s announcement comes less than three months after Gov. Bevin and Congressman Rogers announced completion of the project’s 1A ring in Central Kentucky, which provided an essential uplink to the global internet and allowed for expansion of the network into Eastern Kentucky.

“We celebrated a historic milestone in Kentucky today by turning on KentuckyWired’s highly anticipated network rings in Eastern Kentucky,” said Congressman Hal Rogers, a co-founding principal of SOAR. “Now, we turn our attention to the last mile, by helping local leaders and providers take the next steps to extend the network on out into every community to expand access to your homes and businesses. This new broadband interstate bridges the digital gap to high-tech jobs and economic development opportunities for every single county in Kentucky.”

KentuckyWired’s broadband connectivity is expected to be 10 to 20 times faster than what is currently offered by providers. The network is a middle mile network, meaning that it will be up to local internet service providers (ISPs) to offer broadband to homes and businesses. KentuckyWired representatives are planning a series of community meetings, in partnership with the Center for Rural Development, to ensure that local communities understand the options that are available to connect to the KentuckyWired network.

Reliable, high-speed internet has proven a key factor for job growth and creation, with 79 percent of job seekers reporting the use of online resources in their employment search. KentuckyWired will increase economic opportunities in Eastern Kentucky by providing access to broadband for new and existing companies looking to locate in the region. The KentuckyWired network not only has the potential to transform local economies, but will also provide first responders, healthcare providers, and local governments with the connectivity necessary to protect and serve Kentuckians.

Representatives from Senture, one of Southern and Eastern Kentucky’s largest technology-based employers, joined Gov. Bevin and Congressman Rogers on stage at the SOAR Summit to underscore the importance of broadband connectivity in the region by announcing the addition of 400 jobs at the facilities in London, Annville and Williamsburg.

“Senture is very excited to announce these 400 new jobs for southeastern Kentucky,” said Christopher Deaton, President and CEO. “The hard work and dedication of Senture’s employees make this growth possible. We are excited about new opportunities afforded by KentuckyWired and the future of our company and our communities.”

KentuckyWired officials expect construction of the network to be completed in 2020. To learn more about KentuckyWired and how your community can connect to the network, email kentuckywired@ky.gov or call 502-782-9549.