WOMAN 66, CLIMBED UP AND WAS CLIMBING DOWN WHEN SHE SLIPPED AND FELL; WHILE MAN 56, FELL RUSHING TO CLIMB DOWN TO HELP HER, LEADING BOTH TO BE FLOWN OUT FOR THEIR INJURIES 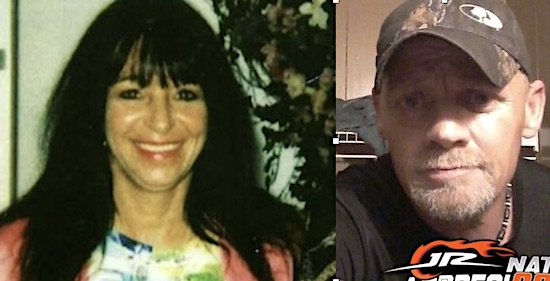 WEBBVILLE RESIDENTS JUANITA HARMON & JERRY WILKS, WHO HAD AN UNEXPECTED ‘TRIP’ ON THE LAST SATURDAY NIGHT OF AUGUST
A foolhardy escapade landed (literally) a Webbville man and woman in dire straits when the two were able to climb up on a tower in Lawrence County, but their trip down went way faster than expected, leading to serious injuries for both of them.
According to Lawrence County Constable-District 3 Daniel Castle, local emergency response units were notified after Lawrence County E-911 received a call on early Saturday night, August 31, at 8:00 P.M. from the Webbville area, that a man and woman, identified as Jerry Wilks 56, and Juanita K. Harmon, 66, both of Webbville, had both been seriously injured from a significant fall from a tall structure in Webbville
According to Constable Castle, eyewitnesses reported the pair were climbing the radio tower along Route 828 road at Clevengers Knob in the Webbville community when Juanita Harmon lost her footing and fell approximately 40 feet, causing extensive damage to her left leg in the form of a compound fracture.
Jerry Wilks then fell from the tower while trying to rush to Harmon and was complaining of neck and back injuries.
Both Juanita Harmon and Jerry Wilks were airlifted by air ambulance helicopters to St. Mary’s Hospital in Huntington, West Virginia because of the extent of both of their injuries.
The investigation in the case is still ongoing by the Lawrence County Sheriff Department. It is unknown as of this time what, if any, legal ramifications Juanita Harmon and Jerry Wilks may face.
ShareTweetShareSendPinShare
Next Post