GROWING UP IN LOUISA: LABOR DAY!

A year ago I wrote this history of a day that was more of a mystery. That is, not too many folks understood the origins of Labor Day. The generations before us didn’t have that trouble, but many of mine and certainly those who came after me were a bit in the dark. For this week’s holiday I have edited last year’s article and added a tidbit or two. I hope you enjoy the quick, painless visit to the past.

It was back in the beginning of the Industrial Revolution when our nation was struggling to put industry to work. In this new mass production environment the common man was fighting to recover from some truly punishing labor practices that led to the labor movement being born. It was a time when pay for the average worker was low and the risk to workers health was appalling. In those early days even children often made up a big portion of the work force, but young women were also pressed into horrible working conditions. Those giants of industry that became known as ‘the great ‘robber barons,’ ran their steel mills, railroads, petroleum operations, and mines. They worked together to ship their products at fixed prices that made the owners obscenely wealthy on the backs of others. They claimed that the collusive actions they took through ‘trusts’ were just ‘smart’ business practices. The problem was that it eliminated competition and damaged the free market. Capitalism did not exist, and neither did socialism. Workers got ahead only by the sweat of their brow, or when possible, using their God-given intelligence to catch the eye of the barons and move into management.

This was a world where grand, wonderful things were being invented. From the masses of abused workers the people who worked in the factories made it known that they wanted their fair share of the American dream. Congress heard their cries and investigated. Legislators first passed tough anti-trust legislation aimed at breaking up monopolies in hopes of allowing fair trade. The ruthless treatment of workers continued but became more and more difficult as the press and others raised complaints. Examples of maltreatment of women and children sickened people all around the nation. A diligent press exposed more and more in a climate despair. Newspaper stories described in vivid detail the loss of life in tragedies such as a notable fire in the garment district, serious accidents in mines, and deaths of workers on the railroads. Labor unions began trying to bring about collective bargaining but they had to face armed mercenaries hired by management. As workers lost their jobs, life in those times was a struggle for both the worker and the family. There was little hope for a future because the company stores used their own paper money and tokens. This kept the workers obligated to the ‘boss’ and tied the employees down to the job. They could not walk away. 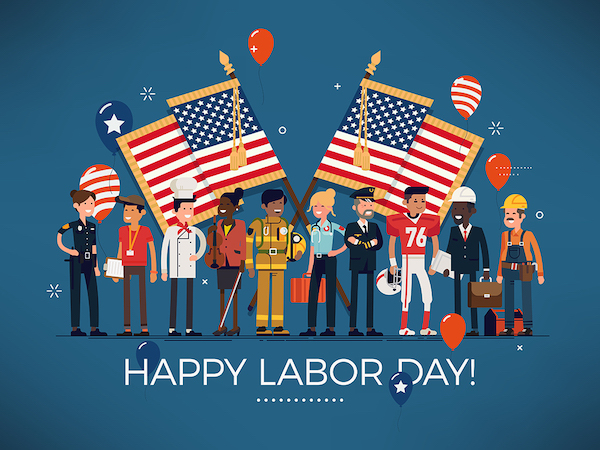 It was on September 5, 1882, still years before the Sherman Act and the Clayton Acts criminalized anti-trust behaviors, when New York workers celebrated the first Labor Day holiday. It was meant to celebrate labor’s contribution to factory output that was producing more and more products to be shipped all over the world. The new holiday was an instant hit. The Industrial Revolution was making it possible for the common person to own and use new inventions that they, themselves, were producing. In turn, that created more products and finally, thanks to the unions, better pay. Free trade was finally working. Workers began to see fair wages for a day’s work, and the workers found an ever-growing list of things to buy, including in some cases, stock in companies when they went public. It was fifty years or so later when this would bust with the ‘stock market crash and our forefathers suffered through the subsequent ‘Great Depression.’ Veterans of those years are nearly all dead, but the depression affected my life and nearly everyone else’s.

In our lifetime we have seen fantastic gains for the common worker thanks to labor unions, but we must realize that while the unions battled for increased benefits and wages they also had a negative effect for the profits of the company. Frankly, business cannot long endure or grow if the strain is too great. That’s when businesses lay off workers or move their production lines to third-world locations where they hired people at lower wages. Alas, as the pendulum swings the lives of the workers grew harder. Nonetheless, this weekend, we celebrate the accomplishment of industry and the benefits brought on by and for the common worker. Finding a win-win relationship in an environment created by either side should always be the goal. It is finally the people who have a vested interest in production. Little by little, we all benefit.

All of this aside, Labor Day really has come to mean one other thing to nearly all of us. When writing this I had to tell myself, “It’s a holiday, silly!” On top of that, it is the last holiday of the summer season and marks our final chance to wildly frolic about before school starts again. The retailers are already pushing ‘back to school’ themes and offering new clothing and supplies. Even the kids are getting anxious about the summer days of freedom disappearing. The new school year is about to take over their lives. It’s a big, big time for the travel and hospitality industries. Labor Day is a stark reminder that vacationers will quickly fade away.

I remember the excitement of ‘back to school,’ more than I do about Labor Day, itself. The Corner store, located on the first floor of the Brunswick Hotel situated in the downtown retail district, was in business to sell school and office supplies, and other novelties. The five and dime store, known to me as the ten-cent store, had piles of jeans, slacks, shirts, blouses, jackets, and tons of paper, pencils and those little pencil sharpeners. The Bargain Store, Ryan’s, Ferguson’s, Clayton’s and the Louisa Department Store were hopeful in big returns.

Seeing the holiday approaching on the calendar the teachers busied themselves getting their rooms ready for the onslaught of a new class of students. The buses were being cleaned, tuned and made ‘road worthy,’ for the new academic year. Labor Day is a holiday, yes, but it was the holiday to workers, students, merchants, and hard-working parents. It meant summer was over and football season was well on its way.

I don’t remember any Labor Day parades, speeches, or parties. Maybe there were some, even if only in the big cities. If they had them I missed seeing anything about them. Maybe, I was too busy trying to get in that last fishing trip, or a watching final baseball game. Mom had dragged me out shopping to replace those worn-out tennis shoes and my jeans with the holes. I should have kept the old ones since ragged jeans are in style these days.

Labor Day is for most everyone a time to take notice of the armies of workers, including the laborers, middle management, and even upper management and investors. We owe those who go to work to earn their income, because that helps them and also helps the economy. We can also thank government workers who attract businesses to our communities, and provide a lot of important services we often take for granted. It is a time that was originally meant to thank those who work day-in and day-out making life better for everyone. It is an American holiday, but the whole world is blessed. Take a moment this weekend and give thanks to a worker for the fruits of their labor.