NOT IN MY HOMETOWN? 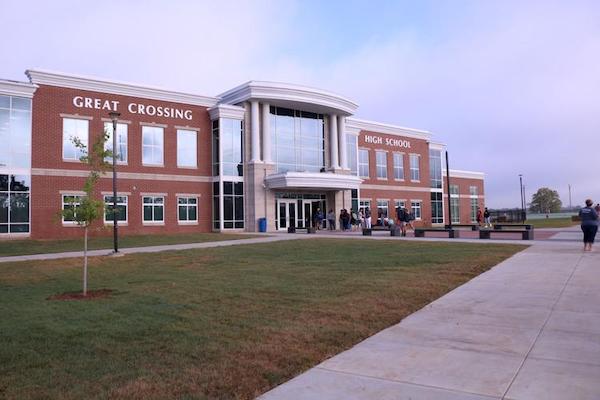 Authorities on Scott County’s Great Crossing High School campus were alerted about 12:56 p.m. Wednesday about a student with a handgun.

“There was good cooperation between the SRO and the teachers to manage the situation quickly,” Bosse said. “Several teachers were involved working with the students during the search.”

The 15-year-old male student’s name is being withheld due to his age, the chief said. He is in custody and police are tracing the origins of the gun, he said.

The investigation is just under way, so it is unclear what purpose the student may have had with the gun, he said. Great Crossing High opened about two weeks ago.

Charges are pending, he said.

GCHS Principal Joy Lusby issued an automated message to parents as soon as the situation was in hand, said Renee Holmes, spokesman for the Scott County School System. The police are handling the release of information, although a copy of the press release will be sent home with students.

More details will be reported as they become available.

It is also unclear if social media threats on the internet regarding rumors of a possible school shooting in Kentucky on Aug. 28 and Arkansas, on Aug. 29 are related to the Wednesday incident at Great Crossing. The FBI office in Louisville tweeted that it was unaware of any “unspecified internet threat,” and there was no evidence the threat was credible. No specific school districts were mentioned in the social media posts.

In Lexington, police are investigating a shooting near the Bluegrass Community & Technical College campus on Newtown Pike. About noon shots were fired at the intersection of Newtown Pike and Booker Street, Lexington police said. The windshield of a truck parked near the campus was struck, but there are no reports of injuries.

GROWING UP IN LOUISA: LABOR DAY!