LAWRENCE COUNTY STUDENTS KEPT HOME BY PARENTS AFTER WARNING FROM FBI OVER UNSPECIFIED ‘THREAT’ OF A SCHOOL SHOOTING IN KENTUCKY FOR WEDNESDAY. 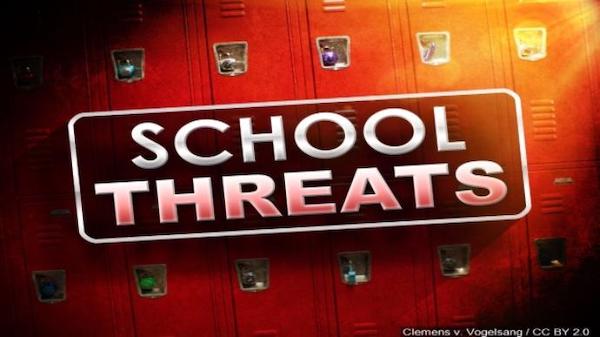 LAWRENCE COUNTY SUPERINTENDENT SENDS LETTERS TO STUDENTS TO TAKE HOME ABOUT THE WARNING, BUT REFUSED TO CALL OFF SCHOOL, OR CLOSING EARLIER FOR THE DAY, BUT EVEN WITH HIGHER POLICE PRESENCE AROUND LAWRENCE COUNTY SCHOOLS, PARENTS TAKE ACTION ANYWAY

PIKE COUNTY HAD SO MANY STUDENTS WHO STAYED HOME, SCHOOL SUPERINTENDENT CRITICIZED PARENTS FOR THEIR OVERREACTION

JUSTIFIED CONCERNED PRECAUTIONARY ACTION – OR A CASE OF MILD HYSTERIA? LAWRENCE ATTENDANCE DOWN TO 64%

Parents, and their children in Lawrence County were left jittery after students came home with a letter from the the school system about an alleged threat made at the beginning of the week that there would be a school shooting somewhere in Kentucky on Wednesday, August 28.

The warning came from FBI office in Kentucky, who then passed it on to the Kentucky Homeland Security, who in turned passed it on to all school districts throughout Kentucky.

The warning came about due to social media posts floating around the internet the past few days have been circulating rumors of a possible school shooting somewhere in Kentucky on August 28 and in Arkansas on August 29.

FBI Louisville
✔
@FBILouisville
FBI Louisville is aware of an unspecified internet threat against schools in Kentucky (08/28) and Arkansas (08/29). There is no evidence indicating this threat is credible. However, if you see something suspicious online or in person, contact local law enforcement or the FBI.
99
3:58 PM – Aug 26, 2019

Meanwhile the FBI in Little Rock, Arkansas sent out a notification during the weekend saying the report of the shooting threat came from someone living in another country who was not identified. The person allegedly learned of the threat while playing an online video game.

Across Kentucky on Wednesday, school systems were given extra protection, with major police presence around schools across the state. However, in a lot of counties, rattled students and worried parents reacted with precaution is thew better valor, by keeping their kids home for the day.

Lawrence County had that somewhat, while the Louisa Police Department stepped up security via their presence by all their officers being on duty and on watch patrol at the schools in the city, with
the Lawrence County Sheriff Department patrolling with at least one or two deputies, along with a constable at the elementary schools in Blaine and Fallsburg.

In addition, the letter sent home with Lawrence County from the superintendent office clearly stated that while letting parents know about the general statewide threat warning from Kentucky Homeland Security, there was never any threat made against Lawrence County Schools what so ever at any point. 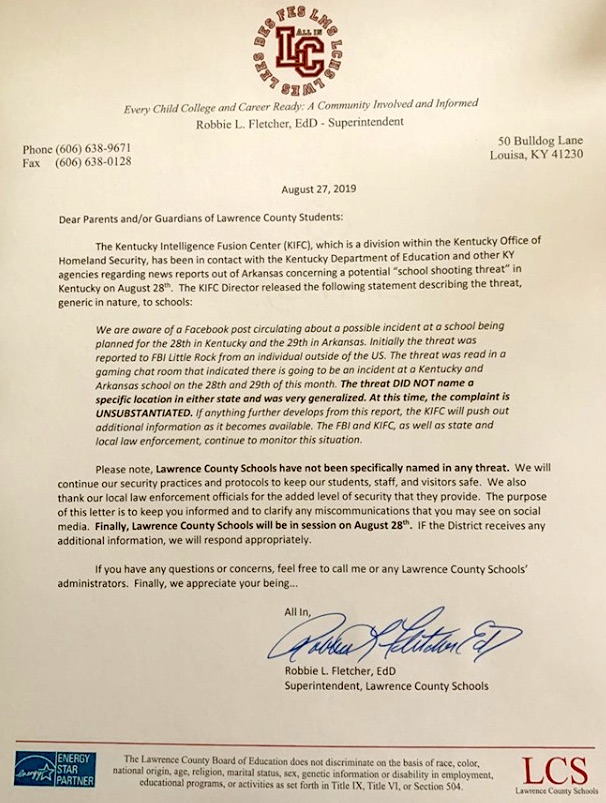 COPY OF THE LETTER FROM LAWRENCE COUNTY SCHOOL SUPERINTENDENT’S OFFICE SENT HOME WITH EACH STUDENT ON TUESDAY ABOUT THE UNSPECIFIED THREAT MADE ABOUT KENTUCKY SCHOOLS, WHILE REITERATING NO THREAT WAS MADE AT ALL INVOLVING LAWRENCE SCHOOLS

However, for a fair amount of parents around the county, that was not enough to sway their fears, with many communicating to each other on social media that they planned to keep their children home due to either their concerns or the palpable worry of the kids.

Lawrence Co. Pupil Personnel director Vernon Hall said this morning that attendance on Wednesday was 64.1% across the county, down nearly 30% from a normal day.

Other parents contacted Lawrence County superintendent Robbie Fletcher office, or other local school administrators, wanting him to either cancel classes for the day, or at least send students home early with the latter the more preferred  action by both parents and students.

But superintendent Fletcher steadfastly ruled both of options out, and released a further follow up about he operations for schools, while also praising local law enforcement for their extra efforts in safeguarding the schools for the day. 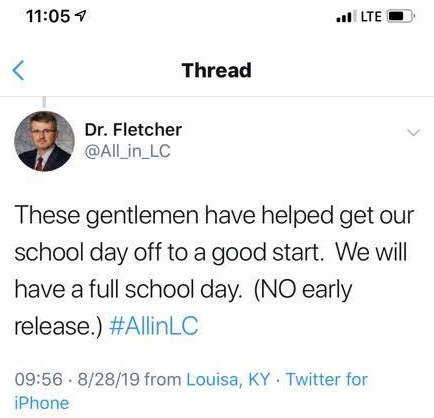 While there was definite consternation among parents and kids in Lawrence County, in other Kentucky counties, there were much higher absentee rates for Wednesday. Especially one of those counties was the nearby Pike County.

Pike County School officials reported that the attendance on Wednesday was significantly down, which led to some criticism of parents by the superintendent of Pike County Schools, who stated the effort they do to protect students every school day.

“Our attendance today was very low and we’re very disappointed in that because we are going to take every precaution to make sure our students are as safe as possible in Pike County,” explained Superintendent Reed Adkins.

Superintendent Adkins said every day, county school officials do their best to maximize security in every Pike County School.

“We realize today is the day people are nervous. We have volunteers who walk our hallways that are doing nothing except checking doors and making sure they don’t see anything suspicious,” Johns Creek Elementary School Principal Chad Thompson pointed out. “We also have 40 of these radios are all over a campus. If something is going to go on, we will know it relatively fast.”

The Herald-Leader reports Kentucky Education Commissioner Wayne Lewis sent the Louisville FBI’s statement to all school superintendents. The state Department of Education communicated with safety officials and keeping an eye on the situation.

No school districts in either state have been singled out in social media posts. Authorities say if you see anything suspicious in person or online, contact local law enforcement or the FBI.