…IN REGARDS TO THE PERSONAL TREATMENT OF SCHOOL STUDENTS WHO CLAIM TO BE IDENTIFIED AS LIVING AN ALTERNATE & DIFFERENT LIFESTYLE. 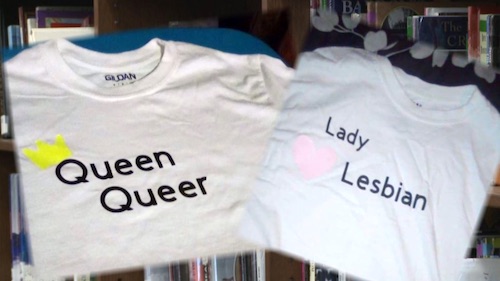 Barely two weeks after the opening of their brand new $20 million school, a controversy has erupted, of the “flaming” kind, in a specific manner of speaking, for a group of students at the school

Multiple students at the new Martin County High School reported they were forced to change shirts after a school administrator claimed they violated the dress code.

Now, those high school students are upset after they say they feel like they were discriminated against.

“It started off around Thursday of last week,” recalled Martin County high school student Lilly Vance. “They were wearing gay pride shirts to school and they all got dress coded for it.”

Two of the shirts worn by those group of students read “Lady Lesbian” and “Queen Queer.”

“Kids wear political shirts. They wear Confederate flag shirts. I just don’t understand what’s so wrong with wearing gay pride shirts,” Miss Vance said. “Nothing we’re doing is wrong. All we are doing is expressing who we are.”

“I don’t think it’s fair because I see people walking around school with Confederate flags on their boots, hats, shirts, and even belt buckles,” Zachary Mills explained.
Mills said he hoped this incident will change the way some may treat those in the LGBTQ community.

“I hope that we, as LGBTQ students and people as a whole, will be treated equally because right now that’s not what it’s looking like,” said Mills.

A statement was released not long after the incident from Superintendent Larry James stating:

“Any miscommunication has been resolved. We definitely do not want any of our students to feel like they are discriminated against.” Superintendent James said.

Lily Vance said she hoped this does not happen again.

“We’re not asking you to believe in what we believe in. We’re just asking for respect,” said Vance.

Lily Vance also said she wanted a GSA group to be formed at Martin County High School after this situation, so LGBTQ students will feel welcome.

“It means Gay-Straight Alliance. It’s for kids who don’t feel safe at home, who just need people to talk to and feel safe and secure. I think everyone deserves that,” Lily Vance said in regards to the student group she is proposing for the high school.