GROWING UP IN LOUISA…Tin Roofs

If you’ve never heard the sound of rain on a tin roof, you probably didn’t grow up before the end of the twentieth century. Metal roofs were all around us during our day and insulation was not so common. Oft times the second floor of a cabin or smaller house was really hardly more than a loft, meaning the inside of the roof could actually be touched when you stood up. That often meant it was either very hot, or very cold.

Most metal roofs were ‘standing seam’ and corrugated, which gave better leak prevention and allowed for a lighter support structure. Barns and homes could be covered fairly easily over boards with nails usually 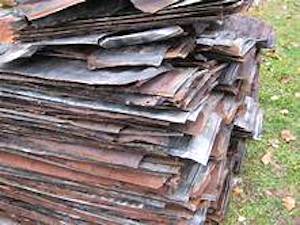 tucked under seams, or just under an overlap. There was always a need to have some flashing, usually melted lead or a tar mixture, but still some exposed nails would work themselves loose over time and water would join the inhabitants underneath. I remember running with buckets and pots trying to catch the drips before lakes would build up on the rugs and damage the hardwood floors. I’ve heard of kids trying to sleep under umbrellas to keep the quilts dry. Those old feather mattresses could hold a lot of water.

I’ve heard that the large government buildings and some mansions had copper roofs, or perhaps real ‘tin’ ones. Most that I remember were galvanized and then painted, usually in a silver or green color. The silver would deflect sun rays and presumably would be cooler. I remember that some would have metal cleats placed around the lower edges to hold back the snow in winter. There’s nothing worse than slamming a door only to suffer being hit by an avalanche in the back of the head.

I remember seeing barns, and sometimes houses whose roofs had been exposed too long and had developed a reddish patina, a hint that rust was starting to develop. Some went long enough that the golden brownish color was spread fairly evenly except perhaps where water tended to puddle or stay beyond its welcome. Areas where water dripped seemed to promote more rust than others.

After a storm you would see the corner of a roof sometimes ripped up. Curls of roofing material might be missing altogether. Whether the main house or outbuilding, such as barns or parking shelters, roofs had to be repaired often. Wind damage was all too common after a big blow. Abandoned sheds, lean-tos, barns, houses and even old school houses would all show their age by the shape and color of their roof. Once the leaks went on long enough the ridge support would rot and the house would sag, eventually being left to collapse. I’ve seen buildings that were standing only because of vines that encased the corpse, refused to let it fall. 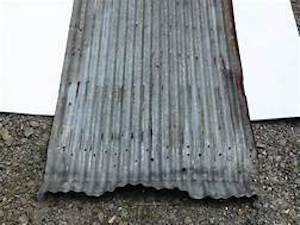 There’s something romantic about these old places. We wonder about the mysteries of human life and the sorrows and joys the shelter provided over its lifetime. We are driven to look within if we dare considering its condition and charges of trespassing. There’s even a chance we’d see something we would not choose to see, whether illegal activities or the sad abandonment of family pictures.

In Europe there are buildings much older than the two or three hundred years we can boast. Those might have metal roofing, too, but are also likely to have thatch roofing. While not as waterproof, and requiring steady repair, they are very nice to look at. They are said to hold all kinds of wildlife, including rats, squirrels, dogs and cats. The old saying “raining cats and dogs” came from the heaviest of rains that would drive the livestock out of the thatch, thus making it appear to rain cats and dogs.

Today most houses have shingle roofing of various qualities. Some have slate roofs whether real, or of a plastic derivative. The semi-flat roofs have membranes, sometimes including a ‘built up’ design using compounds of tar, rubber, plastic and gravel. They have careful drainage systems built in to prevent

puddling, yet many times the drains will plug up and problems occur. Usually these are laid over plywood or board planking. I’ve seen times when repairs were so difficult or expensive it was actually cheaper to build an “A-frame” sloped roof with shingles over the old flat roof to insure water was shed and old leaks were covered over.

My house has a series of sloped roof sections with shingles designed to look like slate. From the ground it does look that way but it didn’t require the heavy support beams that would be required for a real slate roof. It was less expensive, too. We considered a metal roof but found them a little out of our price range. That’s a shame because I really like the looks and the sounds of rain hitting a tin roof.

I remember a particular time back in the day that I laid on a lumpy feather mattress, listening to the gentle rain as it tapped on the metal above. Another time it was a downpour and it seemed as though I could feel the lightning and thunder as it cracked and drove sheets of water across the roof. I wondered if the roof might soon be torn asunder and lifted into the sky, much the same as in the tornado scene in the “Wizard of Oz.” I’ve heard the same sounds in barns and a few times when I had to run to shelter in a ‘milk-house’ or even a root-cellar that had such a roof. 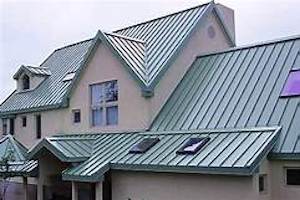 There is no doubt that the roof of today is better insulated, provides better leak resistance, and has superior strength than some of the old ones, but the sound of a gentle rain on the metal roof is hard to beat. Today, shopping centers and homes alike have standing-seam metal roofing installed. Rather than the old corrugated galvanized roofing, it is a special heated alloy that takes a powered pigment far better than mere paint. The color is heat applied at the factory on the newer roofs. The seams stand as high as a two or three inches. They go on over good, solid supports and have built in drainage systems and flashing. I’m not sure that even on the upper floors you would be able to hear the sounds of rain, but the ‘throw-back’ look is attractive. If it were mine, I’d have one place under the roof where I could go, lay back on a mattress, and remember those times past. Maybe I’d take a ‘funny’ book and kick back. Nap time wouldn’t be far away.  Write me. mcoburncppo@aol.com