Kentucky House Minority Leader Rocky Adkins is still considering a run for U.S. Senate next year, but he said he won’t make a decision until after the election this November. 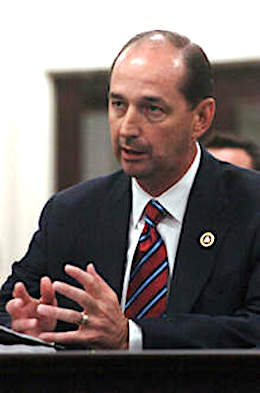 Adkins told reporters outside the Kentucky Farm Bureau’s annual ham breakfast at the state fair in Louisville on Thursday that he is “getting a lot of encouragement” to challenge Senate Majority Leader Mitch McConnell in the 2020 race, which is “still an option.”

However, Adkins said his focus in the coming months will be on leading his party in the state House and helping Democratic statewide candidates on the ballot this fall. Noting that he also waited to announce his candidacy for governor after the general election last year, he added, “I think you play one game at a time.”

Retired Marine Lt. Col. Amy McGrath entered the Senate race last month, raising $2.5 million in the first 24 hours after the Democrat announced her candidacy. After the rocky rollout of her campaign in the following days, some prominent Democrats in the state have called for others to run in the primary, such as Adkins, Kentucky Sports Radio host Matt Jones and state Rep. Charles Booker.

However, Adkins said his consideration of running has nothing to do with McGrath’s stumbles. “If I got in the race it wouldn’t be based on what any other candidate did or any other candidate said, it would be on my heart and soul that that’s what I wanted to do.”

Adkins ran for governor in the Democratic primary this year and picked up 125,970 votes, coming in second to the party’s nominee, Attorney General Andy Beshear. He dominated Eastern Kentucky counties in that election but did poorly in Jefferson County, where he won just 10% of the vote.

Despite his primary performance in Louisville, Adkins says Democrats from the state’s largest city have been among those encouraging him to take on McConnell.

“I’m getting tremendous encouragement from across the state, from here in Louisville,” Adkins said. “Folks are contacting me to say, ‘I wasn’t for you in the primary but you are a person that could be very competitive against Mitch McConnell and you’re a person that could run well statewide, especially in rural areas.’”

Adkins acknowledged that losing his seat in the state House — where he has served since 1987 — would be a downside to running for Senate, though he said he preferred his leadership position when Democrats were in the majority.

He also dismissed concerns that waiting until November to announce a bid would hurt him in fundraising against McGrath, saying that his fundraising would be competitive if he chose to take on McConnell.

Adkins said he considered Jones a “good friend” whom he respects, declining to say whether he wants him to get into the race. Jones is expected to decide whether to run by the end of this month.