LAWRENCE CO. FOOTBALL OPENS UP WITH PAINTSVILLE THIS FRIDAY NIGHT AT HOME 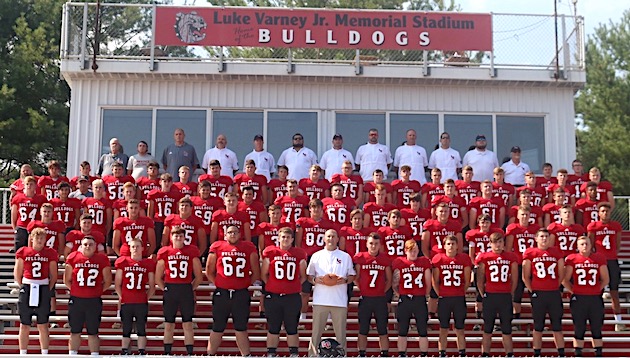 Louisa, Ky — After a 7-5 campaign in 2018 that included an unbelievable 78-74 playoff victory over Western Hills before bowing out to Boyle Co. in the second round, the Lawrence Co. Bulldogs aren’t listening to everyone talk about taking a step backwards.

The Dawgs lost a ton of offense from last year’s squad but are very optimistic that they can keep the pigskin moving and maybe do things a little differently in 2019.

Junior Baden Gillispie, who split time between Quarterback and Running back last year will get most of the reps under center this season with Senior Trevor Young getting carries from the fullback spot after losing some weight since last season. Ethan Moore who has played on the defensive line his entire career and Brandon Davis should see some time running the ball as well.

When the Dawgs throw it long brothers Junior Danny and Sophomore Dougie Hall can stretch the field and two freshmen, Lawson Baisden and Jake Derifield both could be threats.

On the line Seniors Clayton Sullivan, Bradley Osborne, and Trey Halfhill along with Junior Kyle Davis and Sophomore Levi Gauze will anchor the front on offense.

On the defensive side the Dawgs will be under the direction of long time coach Glen Reeves and expect big things from this group. Look for Junior Brandon Davis to have a big year from his linebacking spot, Senior Cole Moore and Junior Dylan Moore will also contribute.

Bulldogs on radio this season!
The Dawgs will open up with Paintsville this Friday at Luke Varney Jr. Memorial Stadium. You can listen to the games this season on WSIP’s new partner station WKYH-FM 99.3 on your radio dial. Or you can listen on your phone or computer on TheLevisaLazer.com, or closed circuit TV station websites Foothills and Lycom. See details in separate Lazer story.

“… I don’t know if you necessarily replace West, Blankenship and that group but we are on to 2019 and we feel like we have a very strong group and shouldn’t miss a beat. We have over 60 kids out right now and that is a little higher than normal and it is such a blessing for us.”

“… Baden Gillispie is a dynamic player and has some wiggle, he is not the fastest player but can throw the ball and that could be the difference. Trevor Young has lost about 30 pounds and that might be the difference for him to get back to his old self, Ethan Moore and Brandon Davis should see some time. Danny Hall, Dougie Hall, Lawson Baisden and Jake Derifield are very capable pass catchers.”

“… Glen Reeves will take over the defense and we are honored to have him on our staff, he coached me when I was here and he is the same man he was back then. I don’t look for us to do much different scheme wise but he will put his own stamp on it. I think we will be better just because of maturity and how hard the kids have been working in the off season and fall camp.”

“… We’re working on developing some depth you know early on it is hot and we will try not to play our linemen both ways but sometimes you can’t help it. Coach Rollins does a great job with our linemen and create a push but we will know more after our two scrimmage games.”

“… Special Teams is fun to work on this year because we have a weapon with SJ Lycans punting and kicking that could be a big advantage for us as a team.”

“… District will be very competitive once again with Belfry, Pike Central, Floyd Central and Magoffin Co. who took the place of Martin Co., and our out of District games will be very tough with Paintsville, Pikeville, Russell, and Raceland and should get us well prepared for the post season.”