BULLDOG FOOTBALL IS BACK ON YOUR RADIO DIAL FOR 2019! 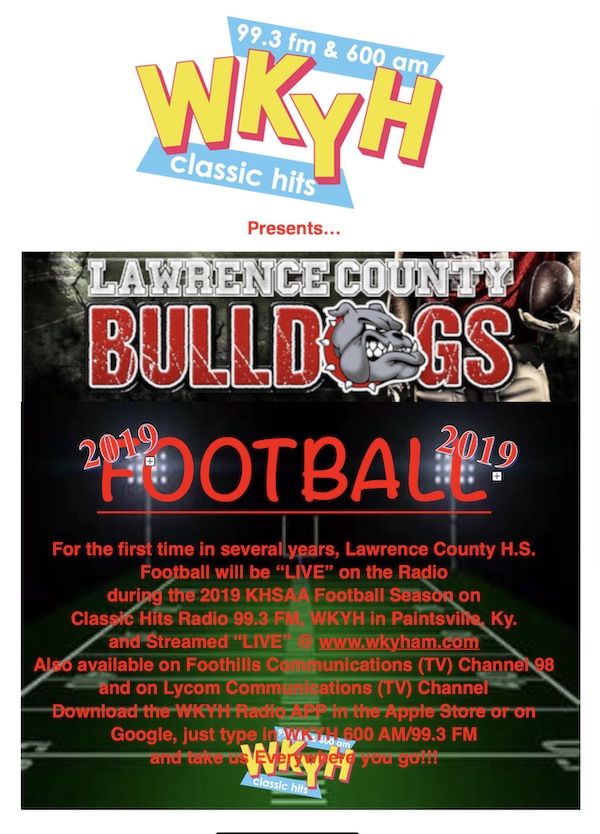 YOU CAN LISTEN ON THE LAZER, TOO!

LOUISA, KY. — After at least two years without live Lawrence County Bulldog football coverage, Paintsville’s WSIP-FM has come to the rescue with a brand new station in it’s network that will carry all of LC’s games this season according to station spokesperson Scott Ratliff.

“We’ve been trying to think of a way to do it since the Louisa station does not carry the games,” Ratliff said this week. “Our engineers have used our AM station, added some boosters and other goodies to it so it will play on 99.3 FM this season.”

Ratliff said the station was encouraged by the support of Louisa businesses that allowed WSIP to broadcast the state baseball tourney in which Lawrence County was playing last year.

Broadcasters for the games will be veteran Wendall Feltner and LC BOE member Heath Preston who has a son on the team. In addition to radio, the games will also be available on internet stations like TheLevisaLazer.com, Foothills, and Lycom.com so you can listen on your cell phone.