‘THURSDAY IN THE PARK’ FOR AUGUST BRINGS MORE ENTERTAINMENT TO LOUISA

Finally, the Third Thursday event in Louisa did not require any umbrellas unless you needed one to shade you from the sun!  The August Music in the Park community event this past Thursday started with perfect weather and the cutest line dancers in all of Eastern Kentucky.  A group of line dancers from Fallsburg Elementary School, led by Mr. Austin Wood, kicked off the night with a dance to “Old Town Road”.  The kids learned the dance in less than a week and the crowd cheered their efforts.

The next performers were the Louisa Boot Scooting dancers who had performed the month before just as the rain started falling!  The line dancers proved that they could kick up their heels just as well in the heat as the rain!  Mr. Wesley Whalen was the opening musical act for the night.  Wes is a Lawrence County resident who is beginning his sophomore year in college.  He sang different genres of songs including some originals and of course, included one from another Lawrence County native, Tyler Childers.

The evening proceeded with a local favorite band, the Kenny Chaney Band, which is also known as the Cornbread Orchestra.  While the KCB played mostly country tunes, they threw in a few rock songs to keep the crowd hopping.

Tourism Director Wes Kingsmore stated “This is by far the biggest crowd that we have seen here at this event. More people came and they stayed longer to hear the music. The weather, of course, was a big factor but so was our entertainment and our food vendors.  People are learning that on the Third Thursday of every month in downtown Louisa, you can bring a chair or blanket and sit down and relax with some good food and good entertainment!” Kingsmore also said that the Tourism Commission is planning to continue the Music in the Park events in both September and October and that they are looking at the possibility of finding an inside venue for the winter months. 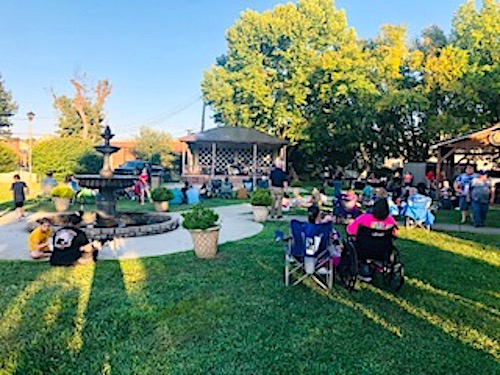