SOME BLACKJEWEL MINERS GET BACK PAY, SOME MINES MAY REOPEN

Out-of-work Kentucky miners who are blocking a coal train to demand unpaid wages from their bankrupt former coal employer on Tuesday took a big step closer to returning to work — and getting at least some of the money they are owed. 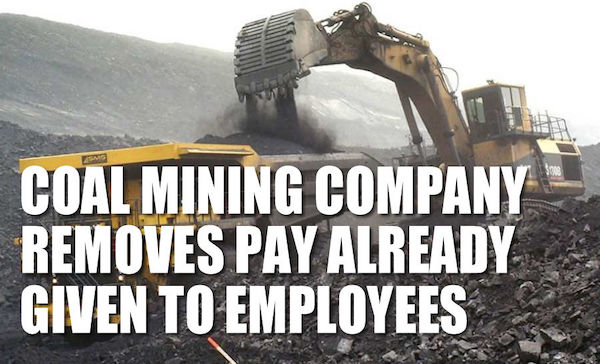 Kopper Glo President Hunter Hobson said that under the still-to-be finalized purchase, the company planned to reopen the handful of mines to produce metallurgical coal and reemploy as many miners as possible.

The deal includes $450,000 toward an estimated $2.5 million in owed wages to Kentucky miners and another $550,000 in royalties toward those wages once mining operations restart.

At the protest site Tuesday, miners who started the day cooking eggs and listening via phone to the bankruptcy proceedings from an open-windowed pickup truck were optimistic but cautious.

“We’re excited,” said Collin Cornette, a former miner who was among those blocking a train of 100 coal cars worth nearly $1 million trying to leave a Blackjewel mine since last week. “It’s not final, but it feels like a victory, like the American working man has been recognized for the struggles we have, not just in coal but every industry.”

The miners may decide to stay on the site until cash is in hand, he said. Ned Pillersdorf, who is representing the miners, said he will travel to the tracks to meet with miners tomorrow.

The July 1 bankruptcy of the nation’s sixth-largest U.S. coal producer came without warning and sparked financial turmoil when paychecks bounced. It left 1,700 jobless in Wyoming, Virginia, West Virginia and Kentucky, including more than a quarter of miners in Harlan County, the site of historic battles for miners’ rights.

Pillersdorf said he and other attorneys will continue to battle for a share of the $6 million sale price to get them closer to the full amount or more under wage laws that allow for double damages.

“We’ve got a real chance to make these guys whole,” he said, adding that it’s unusual for workers to get prioritized in such bankruptcy cases.

Kopper Glo agreed to pay $6.3 million in cash for the properties as well as more than $9 million in royalties.

The miners’ coal-train standoff in Harlan County, which came weeks after the bankruptcy, catalyzed attention from national politicians and news media. Dozens of miners attended the hearings on Monday wearing yellow “Pay the Miners First” T-shirts.

Once miners were on the tracks, news reports prompted U.S. Labor Department investigators to go Harlan County, court documents said. They later filed a motion block the shipment until employees got back pay.

While some relief was finally a real possibility, the long-term impact of the bankruptcy’s turmoil in Harlan remains to be seen. Blackjewel’s collapse followed a string of coal company bankruptcies in recent years.