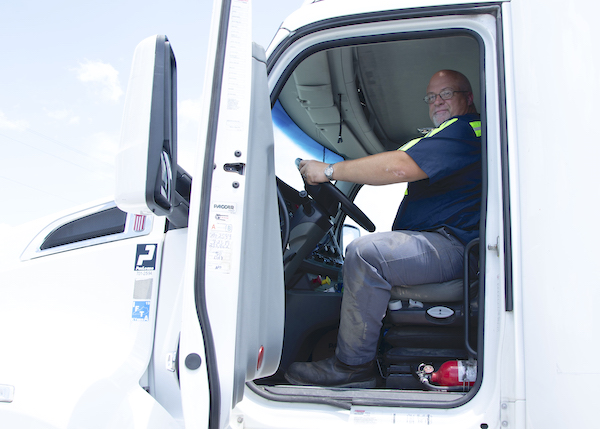 Lawrence Countian Christopher Sizemore says he can’t believe how different his typical working day is now compared to just one year ago. Waking up before the sun and looking forward to a 30-hour-or-more work shift was normal for him—not to mention the 1,000 miles that stood between he and his family—as he worked for weeks at a time with an oil drilling company in Texas.

“I needed work, so I took the job because at the time it was the best I could find in the area,” Sizemore explains, adjusting in his seat in an office of the Northeast Kentucky Community Action Agency (NKCAA) in Louisa, Ky. “Most of the jobs I’d done previously were labor jobs, warehouse jobs, forklift operator, things like that.”

Unfortunately, the temporary agency out of West Virginia that Sizemore had been hired through at the time should have been a warning of things to come as his position also turned out to be temporary.

“As the drilling slowed down, my work also slowed down. That’s when they laid me off, and that’s when I came back home,” Sizemore says of his layoff from the oil drilling company in September 2018.

Having already wrestled with trying to find gainful employment in his home region, Sizemore knew he was coming home to likely fight a losing battle. Before he’d had a chance to settle back into home life, he made the trip to apply for his unemployment insurance at NKCAA.

A partner in the Kentucky Career Center JobSight network of workforce centers, NKCAA provides Workforce Innovation and Opportunity Act (WIOA) services in Carter, Elliott, and Lawrence counties under contract with the Eastern Kentucky Concentrated Employment Program, Inc. (EKCEP). Those services include programs for adults, dislocated workers, and for in-school and out-of-school youth who may need assistance honing skills such as résumé building or networking with local employers, or who need assistance being retrained or going to school.

Sizemore met with expert career advisor JoAnn Chaffin to help apply for his unemployment benefits, not knowing that NKCAA offered much more than just that.

“She asked me if there was any kind of training that I wanted to do, so I said I’d like to go back and get my CDL,” he says. “That’s when she started explaining to me about the program and telling me what they would do and pay for. I had no idea they could do all of that!”

That same day, Sizemore, with Chaffin’s help, enrolled in the month-long CDL program through Big Sandy Community and Technical College (BSCTC) at the Hagar Hill campus. All expenses for the program were covered for Sizemore through NKCAA since he had recently been laid off.

“The program I went into, I was not able to get financial aid or any kind of student loans for, so I would have either had to pay it out of my pocket right then or try to work and go to school,” Sizemore explains. “With the program here, I was able to go and they even gave me gas money to go on. Everybody knows unemployment doesn’t pay like regular wages, so every little bit of help you can get, you take.”

“Everything I needed they provided. They were just great,” he adds.

Sizemore was able to start in the next available class on November 1, and continued to work with his career advisor to bulk up his jobseeking skills and resources.

“She (Chaffin) did résumé help for me. She updated my résumé and uploaded it online. She informed me on who was hiring in the area. Anything I needed, all I had to do was call her or message her and she went to bat for me,” he says, nodding to emphasize his point.

By the end of the month, Sizemore was equipped with a solid résumé and was ready to receive his hard-earned CDL. However, that’s not all he would receive by his graduation.

“I graduated school and I was working about two days later,” he says. “They (the company) had actually called the school where I was at and they were asking if they had any prospective drivers, any guys that would want to come to work. I went and interviewed and the instructor at the school gave them my name. I was already in the truck training the next week—it was that fast.”

Sizemore is still working for that company—Kentucky Oil and Refinery—today as a fuel delivery driver.

“With this job, it is long hours, but I come home every night. The money is so much better than what I was doing. I can actually pay bills now and have money leftover instead of having to worry about where this bill’s going to come from or that bill,” he says. “That’s a pretty good feeling.”

Since he’s had such success with NKCAA, Sizemore says he’s had numerous friends, family, and even strangers ask him how he did it all—and he’s told them all the same thing.

“You have to ask, you have to make phone calls and come in. I’ve always told people, just go talk to them. They will give you all the info you need. They will tell you everything you need to do,” he says. “I took advantage of it and I don’t regret a minute of it. It greatly changed my life, it really did. I’m just living a much better life.”

EKCEP, a nonprofit workforce development agency headquartered in Hazard, Ky., serves the citizens of 23 Appalachian coalfield counties. The agency provides an array of workforce development services and operates the Kentucky Career Center JobSight network of workforce centers, which provide access to more than a dozen state and federal programs that offer employment and training assistance for jobseekers and employers all under one roof. Learn more about us at http://www.ekcep.org, http://www.jobsight.org and http://www.facebook.com/ekcep.