” NEVER LEAVE A MAN BEHIND “

” Never Leave A Man Behind “ 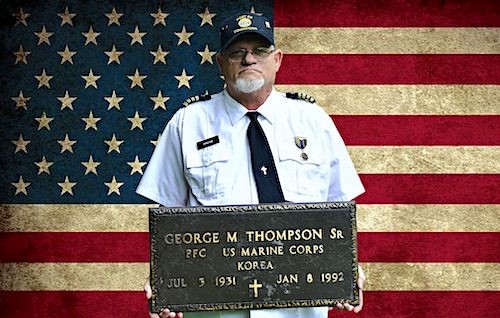 Fred Jackson was cleaning out a storage unit, at Dave’s Auto Service, when he came across a United States veterans brass grave foot plate. He said, “He just couldn’t throw it away”. Which reflected his care and respect for our veterans.

So he gave the foot plate to me, (Commander Frank Kincaid, American Legion, Post #89, in Louisa, Kentucky). Frank Kincaid: From there I began my search to find out exactly where this honored veteran was placed to rest. My respect for him and his service left me determined  to find this George M. Thompson Sr. that this brass foot plate represented.

My first stop on my quest for answers was to speak to Doug Saylers at “Sullivan University” in Louisa, Kentucky. With his help I was able to find out where George M. Thompson Sr.was buried, but we were still unable to find his obituary, or even his next of kin.

It was then that I humbly asked them, “If I sent them this brass foot plate, would they care to place it where it belonged, in it’s proper place”? They responded by saying that, “They would be happy to take care of it”. George M. Thompson Sr. is buried at Mount Calvary Cemetery, located in Monogah, in Marion County, West Virginia.

I give a special thanks to everyone who has helped in this process of finding the location of the deceased, that we call comrade.