GROWING UP IN LOUISA…Flat irons

I was watching a movie on TV the other night when the camera panned and showed various points in New York City. One struck my attention, not because of my familiarity or memories connected with it, but rather what it brought up from my years of growing up in Eastern Kentucky. You see, there are many things we found useful in our past that while taken for granted back then, are forgotten today. For example, we rarely see phone booths any more. It’s likely they earn far less than the cost of maintaining them. Oh, excuse me, I’m down another of my rabbit trails. The building that brought this on was the famous ‘Flat Iron Building,’ named that because of its shape. It very much resembles the shape of an old-fashioned flat iron.

I was reminded of a visual joke we saw often on early TV. The picture showed a newlywed wife or an incompetent husband holding up a shirt with an iron-shaped burn. Well, it wasn’t much of a joke to me because I did that very trick when I was learning to iron my own shirts. Being a slow learner, I repeated it 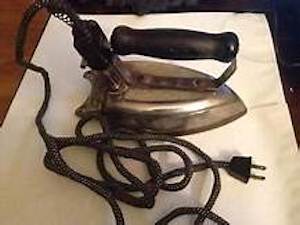 several times while I was growing up in the 40’s and 50’s. I didn’t always burn a hole all the way through, but a brown scar came to be on the back of several of my dress shirts. I was given the advice to just ‘keep my jacket on” and no one would know. Well, I knew and squirmed in my jacket whether it was hot or not.

As a young boy circumstances led to me getting a lot of experience at ironing. Over time, I did get better. In those early days before political correctness, ironing was thought of as ‘woman’s work.’ I was taught early on to do a lot of domestic things whether I wanted or not. This was my fate when I was a teenager. I had a strong-willed mother and a houseful of female relatives who would make today’s women proud.

I remember that during the war years garments were almost always made of cotton or wool. Because wool tended to shrink, was hot and scratchy, this fabric was usually saved for dress suits (so you could be plenty hot), baseball uniforms (so you could be hot and itchy), or for winter underwear and shirts (finally a good use). In comparison, cotton garments were easy to maintain and comfortable even in hot weather. Cotton was used for underwear, dress shirts, sheets and pillow cases, and those cute gingham tablecloths and even dresses.

It would be later, after the war years, before nylon, rayon and other synthetic cloth was generally available in stores. After it was, it became the rage among the women folk. The new fabrics were advertised as ‘wash and wear!’ Mom was thrilled and even I thought it was neater. We no longer had to slave over the ironing board, rubbing out wrinkles. The cloths made of these new man-made fabrics were slick and ‘permanent-pressed’ as advertised. The problem was that it I learned that those new fabrics melted when ironed. I discovered this after melting my favorite shirt. Instead of ‘permanent press’ it was now permanently wrinkled in one spot. I’d have to keep my jacket on, again.

Growing up with my Great Grandmother, a Great Aunt, and a mother sometimes had its advantages. For example, when in high school, our family not only had bought a real electric iron (remember the striped cords?) and a nice adjustable ironing board, but we kept the backup flat-iron. Yes, I’m talking about the old (literally) hunk of iron that you could warm in a fireplace or on top of a cook stove. In fact, we usually had about three of them with a single wooden handle. Three were needed because two would be warming while you used the third. They worked well on cotton, whether starched or merely dampened, but had little effect on heavy wool unless it was pretty well soaked. I remember a Pepsi bottle with a sprinkle plug used to dampen the clothing before applying the iron. It would be a while before we would have a ‘steam iron.’ 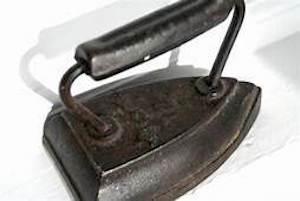 Those old irons were not a good choice to use with the new fabrics. Trust me, wrinkles were better. The fancier new electric irons had a little temperature control switch that worked like a model train transformer. They saved the day by allowing you to select cooler or warmer settings appropriate to the fabric. The old metal iron ones were heated to a temperature that was at best totally unknown. I remember watching others spit on the iron to judge how hot the iron might be.

An event happened on the night of a major dance at school that the single suit was in dire need of pressing. As it happened, every lady in the house was busy on some other important task, but they had time enough to remind me that I’d had more than a few weeks to get this suite pressed. I had no choice but to go to the ironing board. Just after setting it up and plugging in the modern iron that we had just purchased, the power went out. This was a reminder of Murphy’s Law. (If something can go wrong, it will.) To solve this lack of electricity dilemma I lit a hurricane lamp, lit the gas range, and put two of our old-fashioned ‘flat irons’ over the burners on the kitchen stove. While they were heating, I looked for the detachable wooden 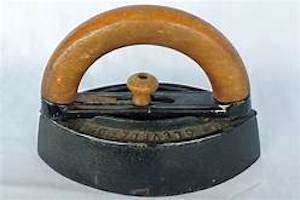 handles but failed to find them anywhere. Likely, they were in hiding still attached to the missing third iron. I had been anxious about getting to the flower shop before it closed to pick up my date’s corsage. Now I was having to use some channel-lock pliers to substitute for the missing handle. I was able to manipulate the irons over my poor suit and knock out the worst of the wrinkles. The events of that evening were burned (pun intended) into my memory.  I survived the night in spite of being an insecure and sensitive teen and in spite of blown fuses (a simple fix I discovered after I finished ironing). The only iron I want to see today are those found in a golf bag.

I often wondered when people really started worrying about wrinkles. I mean, on their clothing, of course. Did Abe Lincoln really take a flat iron as he rode horse-back from courthouse to courthouse? How about George Washington in his tent? Were those Roman togas that Julius Caesar is said to have worn ‘wash and wear?’ Even though my wife still occasionally irons this or that, as do my sons, most come out of the dryer soft, fluffy and wrinkle-free. Man life is good!

As those important things we use continue to be replaced by something new, or are integrated into a ‘smart’ appliance, we lose touch with things of the past. Our grandchildren couldn’t hook up a horse to a wagon, milk a cow, make butter or soap, or even understand why they would want to. Life is good, but it is vastly different. Ask a teen what a flat iron is and chances are they wouldn’t know. Well, we have ‘wash ‘n wear,’ don’t we?

FIRST DAY OF SCHOOL FOR STUDENTS IS AUGUST 7 IN LAWRENCE CO.