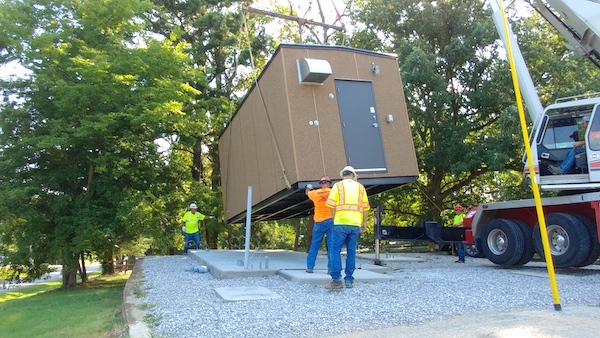 FRANKFORT — The state’s KentuckyWired project reached another milestone, placing the last of 20 local telecommunications huts across the state. The final hut was installed in Henderson, near U.S. 41 and the Henderson bypass on June 27. The huts, housing communications equipment vital to the KentuckyWired fiber optic network, are located primarily at state police posts and Kentucky Community and Technical College campuses.

“I’m excited to see KentuckyWired’s infrastructure beginning to be built out in Northwest Kentucky,” said State Senator Robby Mills, who represents Henderson and Senate District 4. “Access to reliable, low cost internet service is one of the keys to attracting the high paying jobs our communities desire!”

State Rep. Rob Wiederstein, who also represents Henderson and House District 11 said, “It is universally recognized that access to high-speed internet is crucial for rural Kentucky to thrive. While KentuckyWired has had some challenges, they are being addressed. I can think of no other infrastructure initiative that has the economic development potential that KentuckyWired does.”

Along its 3,000-mile path, private companies can connect to the network and lease its fiber. This will enable private internet companies to expand their service farther out into more remote areas. Similarly, cellular companies will be able to lease capacity to connect to more cell phone towers throughout the Commonwealth. KentuckyWired will attract companies to build in Kentucky, enhance education and healthcare opportunities, and boost economic investment and job growth.

More than half of the 3,000 miles of fiber cable is in place, and the “backbone” of the first portion of the network, Lexington-to-Louisville-to-Cincinnati, has been completed. The entire KentuckyWired network is projected to be completed in 2020, although portions of the network may be activated earlier.