CATLETTSBURG, Ky.  –  A United States Marine has a chance at a fresh start thanks to hard work and a specialized court program led by northeastern Kentucky circuit court judges in conjunction with the Veterans Administration.

Blankenship was originally charged with trafficking in a controlled substance but graduated Veterans Court after being enrolled since last year and successfully meeting all requirements with no complications or setbacks.

“It gives me great pleasure to enter an order this afternoon that dismisses the criminal charges against Mr. Blankenship, dismissed due to his participation and completion of the Veterans Court program,” Boyd County Circuit Judge John Vincent said. “Congratulations, we’re very, very proud.” 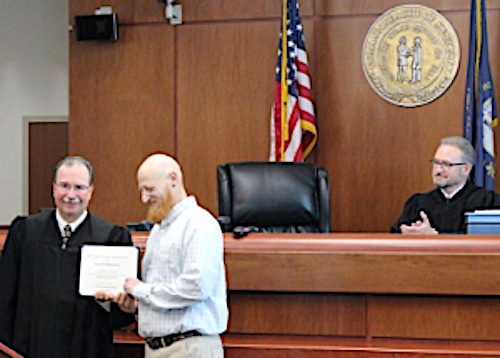 Blankenship, who served as an infantry Marine from 1993 to 1996, said that the judges and Veterans Court allowed him a new opportunity in his life.

“I just wanted to thank everyone here,” Blankenship said. “Thank you to my family.”
The courtroom was filled with supporters from the VA, court staff, along with several members of Blankenship’s family and friends.

“You all won’t be seeing me again,” Blankenship said with a smile to the judges.

Veterans Court is an outreach program that is affiliated with the VA Medical Center, and is officially called the Veterans Justice Outreach Program, Vincent said.

“It’s designed to work with local justice system partners to identify veterans that enter the justice system and are in need of treatment services rather than incarceration,” Vincent said.

“Every veteran gets an assessment, and those who are a good fit for veterans court gets treatment,” Miller said. “We link them to the appropriate service for the underlying issue.”

“This is our first graduation during the calendar year 2019,” Vincent said. “We’re very proud in Boyd County to continue in this program. We have it and we are even now receiving referrals from other counties to allow us to process those eligible for Veterans Court in our system.”

Miller said that after receiving a referral for Blankenship in July 2018, he was then admitted to the program in September 2018.

“We’re very proud of him,” Miller said. “He’s someone who was absolutely devoted to working on the treatment team’s recommendations. Someone who actively engaged. He actively participated in all the things they asked him to do. He was fully engaged, fully committed and graduated without any sanctions or restarts.”

“It’s pretty intense, it made me take a long hard look at myself,” Blankenship said. “I have a great family and a huge support group. I couldn’t have done it without them.”
Blankenship said he attended weekly meetings, therapies, and multiple other requirements of the court to graduate.

“On behalf of the Department of Veteran’s Affairs we wanted to congratulate you,” Nimmo said. “Hoorah!”

“Judge Davis was instrumental in working with Supreme Court Justice Will T. Scott in bringing this program to Boyd County,” Vincent said. “We owe him a gratitude of thanks because a nation should always cherish their veterans and this program allows us to act that way for our citizens in Boyd County.”

“I’d like to commend Judge Vincent for presiding over Veterans Court in this division, he stepped up and he has a passion for those who served our country,” Davis said. Davis said that when the program started there was no funding, so Veterans Court operates solely through the Veterans Administration and has no expense to the taxpayers.

“Your honors, I wanted to express our appreciations to you, thank you for supporting our veterans,” Nimmo said. “We couldn’t be more proud. This really takes a team.”

By Carly Carver
The Daily Independent