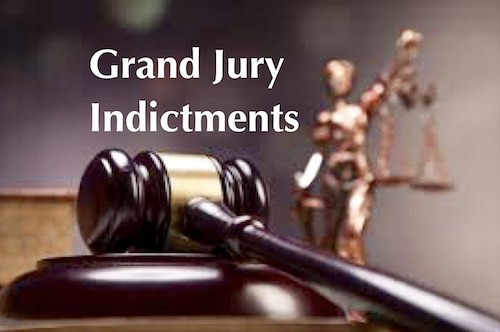 JULY 2, 2019 – written by WADE QUEEN
On Wednesday, June 19, the Johnson County grand jury issued 24 indictments against 20 people. Two of those inducements had connections to the Louisa area
In indictment case number one, a woman, identified as Mary A. Moore, 45, of Louisa, was indicted on the charge of:
• ESCAPE 2ND DEGREE-(IDENTIFY FACILITY);
a Class D felony, with a prison sentence of 1-5 years, for which she is alleged to to have escaped from the custody of her approved and registered residence while under the supervision of the 24th Judicial Circuit Corrections Program on April 27.
Mary Moore was arrested in Lawrence County on June 6, by deputy Michael Housinger, on the escape charge warrant   (before the indictment was issued), also along with 4 other separate court bench warrants by deputy Housinger. Ms. Moore has been jailed since her June 6 arrest at the Big Sandy Regional Detention Center in Paintsville.
In the other indictment case connected to Lawrence County, a Johnson County man was indicted on 2 felony theft charges involving stolen property from a Louisa business.
Adam C. Vanhoose, 31, of Staffordsville, indicted on the charges of:

both Class D felonies; for which he is charged with receiving stolen property under $10,000, and also obscuring the identity of a machine or other property over $500 for allegedly possessing 2007 tow-dolly on April 12, that was stolen from Convenient Storage of Louisa with a value of $2,000, and knowing that the vehicle identification number/identification plate had been removed, defaced, covered, altered, destroyed or otherwise obscured.
Adam Vanhoose was arrested on Sunday, June 30, by deputies of the Johnson County Sheriff Department, and was taken to the Big Sandy Regional Detention Center in Paintsville. Vanhoose posted his bail bond Monday afternoon, and has since been released from the jail.
ShareTweetShareSendPinShare
Next Post