DROVE AWAY FRON SCENE WITH OFFICER HANGING FROM WINDOW 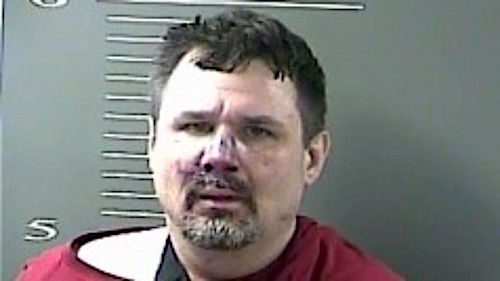 HE FOUGHT THE LAW, AND THE LAW WON: WORSE FOR WEAR SUSPECT PHILLIP BURGIN OF WEST VAN LEAR WHO DRAGGED STATE TROOPER 75 FEET WITH CAR.

A Johnson County man was arrested and remains lodged in jail on no bond after he dragged a Kentucky State Police trooper hanging from his car Tuesday, according to law enforcement officials said.

According to the Kentucky State Police arrest report, two troopers were on patrol near the intersection of KY 1559 and Puncheon Creek in Johnson County, early Tuesday morning June 25, when they conducted a routine traffic stop on a vehicle. As the troopers had stopped the vehicle and were talking to the people inside  another vehicle, a black Nissan car,  came up behind them and pulled up to their location.

As trooper Ryan Hale approached that second vehicle and went to talk to the driver, he recognized the driver, 39-year old Phillip J. Burgin of West Van Lear, who was wanted on active arrest warrants.

When trooper Hale told Burgin to park the car and get out, that was when instead, Burgin put the car in reverse and tried to back away. That is when trooper Hale dove through the driver’s side window, attempting to turn the ignition off, by grabbing Phillip Burgin with one hand and trying to turn off the car with the other hand.

Phillip Burgin hit the gas, accelerating the vehicle. and drove away in reverse. The trooper was still hanging out of the window and was dragged about 75 feet wedging the trooper Hale between the vehicle and a hillside, until Burgin hit the hillside. The impact knocked off trooper Hale, pinning him between the hillside and the car, but Burgin kept driving, police officers said. Burgin went over an embankment before he stopped and got out of the car.

Trooper Hale managed to free himself as Burgin began to speed away in reverse going over a small embankment. Burgin exited his vehicle and ran from trooper Hale.

As Phillip Burgin tried to run from trooper Hale, the officer caught up with Burgin and he used his taser, but it had no effect on Burgin, and unsuccessfully tried to use his taser more on him.

After a short chase, Burgin made it to a creek where he and trooper Hale began scuffling in the creek. That is when the second trooper caught up to both of them and helped in assisting with the handcuffing of Burgin.

Both state troopers said at the time of the arrest Phillip Burgin had tightly-constricted pupils and told the officers multiple times that he was “a drug addict and makes bad decisions.”

Phillip Burgin and trooper Ryan Hale were both treated for minor injuries at Paul B. Hall Medical Center in Paintsville.

Once cleared, Phillip Burgin was then taken to Big Sandy Regional Detention Center. Besides the two active warrants on Burgin, for which their charges were:

• FAILURE TO APPEAR, CITATION FOR MISDEMEANOR; Burgin was then charge with an additional seven charges, which were: