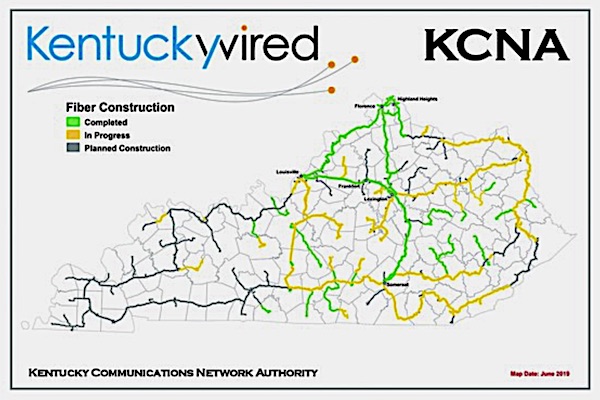 The first portion of the network, known as Ring 1A, is now complete and includes Louisville, Lexington and Cincinnati/Northern Kentucky. Additionally, a key backbone segment from Lexington to Somerset has also been completed, allowing for expansion of the network into Eastern Kentucky as the project moves into the next phase.

“We are excited today to announce a significant milestone in the Commonwealth’s progress toward statewide rural broadband connectivity,” said Gov. Bevin. “The completion of KentuckyWired’s initial phase is a major step in extending high-speed internet access into each of our 120 counties. This vital infrastructure will create powerful opportunities for Kentuckians through enhanced job creation, economic investment, education, health care, and countless other public and private sector services.”

It is estimated that 23.4 million rural Americans lack broadband internet access, and today’s announced completion of Ring 1A provides the foundation for the KentuckyWired network to begin expansion into Eastern and Western Kentucky. The ring includes major uplinks to the global internet in Louisville and Cincinnati as well as state facilities in Frankfort.

Congressman Rogers noted that the completed 80-mile segment between Lexington and Somerset, shows the significant progress of the KentuckyWired network and signals that broadband access will soon be available in the Eastern Kentucky region.

“This means one great thing for southern and eastern Kentucky – we are closing the digital divide,” said Congressman Rogers. “This first link to Somerset opens a brand new corridor of connectivity that includes countless opportunities for jobs, telemedicine, advancements in education, and much more. The Super I-Way, as I like to call it, drives directly into every county so providers can extend this high performing broadband interstate to more people and more businesses.”

In 2017, according to U.S. News & World Report, Kentucky ranked 48th in the nation for access to broadband. When the KentuckyWired project is completed, the Commonwealth will be the first state in the nation to build an open-access fiber optic cable network in every county.

Studies estimate that closing the broadband gap could generate as much as $32 billion in annual economic value. Reliable, fast internet has also proven key for job growth and creation, with 79 percent of job seekers reporting the use of online resources. The KentuckyWired network not only has the potential to transform local economies, but will also provide first responders, healthcare providers, and local governments with the connectivity necessary to protect and serve Kentuckians.

When the project is completed, more than 3,000 miles of fiber optic cable will stretch across the state, acting as a “middle mile” network to each of the 120 counties, ultimately connecting the global internet and internet service providers (ISPs). The ISPs will, in turn, provide direct broadband access to individual homes and businesses.

“Today’s announcement is a significant step forward for the KentuckyWired project,” said Deck Decker, acting director of Kentucky Communications Network Authority (KCNA) – the agency that oversees KentuckyWired. “We are striving to deliver on the commitment made to Kentuckians to deliver fast, reliable broadband network. With more than 1,600 miles of fiber constructed so far, we are well over half way there.”

The KentuckyWired network will link directly to state facilities, including government offices, state police posts, and state parks. The network will also provide broadband access to state universities and community colleges. The University of Kentucky, located within the completed 1A ring, will now be able to connect to the KentuckyWired network.

“Throughout history, new advancements in technology have repeatedly revolutionized business, industry, and the public sector,” said University of Kentucky president Dr. Eli Capilouto. “A robust broadband infrastructure through KentuckyWired can and will play a critical role in expanding access to higher education for Kentucky citizens — education that will strengthen and diversify a modern economy for the Commonwealth.”

KentuckyWired officials continue to work with project partners to meet the 2020 scheduled completion date. Challenges that delayed construction in the beginning have been resolved, and things are moving along at a much faster pace now. According to Decker, crews installed three times the usual amount of fiber last month.

“Whether we’re hanging fiber in Pikeville or constructing telecommunications huts in Hopkinsville and Henderson, we’re working all across the state to get this project completed as quickly as possible,” said Decker.

IWI Communications is an ISP that is already working with KentuckyWired. The company plans to bring faster broadband internet service to customers in Lincoln and Rockcastle counties. “We’d love to connect to KentuckyWired. That would be a big ‘get’ for us,” added Micah Ward, owner of IWI. “They’ll help bring cheaper costs so we can expand to more homes in rural areas.”