BEVIN TO ATTRACT US PRESIDENT, VP TO KY FOR ELECTION 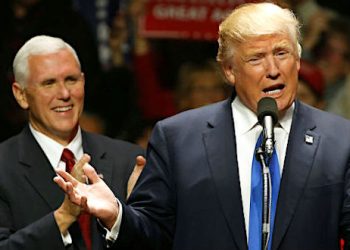 The boys are coming back to town, Gov. Matt Bevin says – the boys, in this case, being President Donald Trump and Vice President Mike Pence.

Bevin is back on the ballot this fall and facing what’s expected to be a tough challenge from Democrat Andy Beshear. But Kentucky’s Republican governor says he expects Trump and Pence to visit the Bluegrass State “once, twice, maybe more” ahead of the Nov. 5 election.

Bevin, in a Tuesday radio appearance on WKDZ radio, said he spoke with Trump and Pence at the White House over the weekend.

“They want to – this is something they want to do,” Bevin told host Alan Watts. “They love this area and I’m grateful for that.”

The governor wrapped up his appearance on the show by touting the economic progress Kentucky has made during his time in office and by pleading for voters to beat low voter turnout expectations this fall.

Bevin is tight with the president and vice president, who are not up for reelection this year but will be in 2020.

He and Pence were close when Pence served as Indiana’s governor in the years before he took over as vice president. Pence appeared at Bevin reelection event in March, where he said Kentucky’s governor and running mate Ralph Alvarado have “the full and total endorsement of the 45th president of the United States of America.”

Trump, meanwhile, recorded a phone message sent to Kentucky voters ahead of May’s primary election where he urged voters to support Bevin, his “good friend.” The governor has tied his reelection campaign closely to the Trump, with the president playing a prominent role in a Bevin campaign commercial ahead the primary. Bevin received 52.4% of the four-way vote against three GOP challengers in that race, with 39% going to challenger Robert Goforth.