KENTUCKY HIT WITH TICK EPIDEMIC, SOME COUNTIES WORSE THAN OTHERS 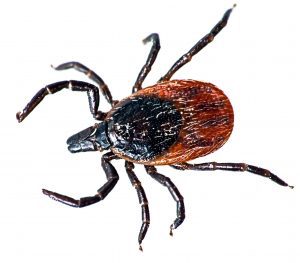 Summer is finally here for families to enjoy the great outdoors. Unfortunately, ticks see it the same way.

“We’ve been getting slammed with tick reports all across the counties,” said Health Promotion Manager Terrie Burgan with the Lincoln Trail District Health Department in Elizabethtown. “We just want people to be aware and start taking precautions because people are outside more.”

The LTDHD serves Hardin, LaRue, Marion, Meade, Nelson and Washington counties. Burgan said the department has dealt with more than 65 cases regarding tick outbreaks in those counties since April. Among these human cases, the most common diseases are Rocky Mountain spotted fever and Lyme borreliosis, also known as Lyme disease.

Rocky Mountain spotted fever is a bacterial disease spread through the bite of an infected tick, and most people who get sick will experience a fever, headache, nausea and rash. If not treated early with the right antibiotic, RSMF can be deadly, Burgan said. Lyme disease is an infection caused by Borrelia burgdorferi, a type of bacterium called a spirochete that is carried by deer ticks. An infected tick can transmit the spirochete to the humans and animals it bites.

The primary symptoms within most of the people LTDHD has investigated are feeling weary, muscle aches or a fever, Burgan said. All of these symptoms show similar signs of the flu, so it is difficult to identify viable treatment options.

According to the Kentucky Epidemiology Department, there are many cases still pending. However the department confirms that 10 cases have been reported in Hardin County, three in LaRue County, five in Nelson, nine in Meade, four in Marion and five cases in Washington County. All of these are RMSF reports and range from 3 to 75 years old. There has only been one Lyme disease case in Washington County that is either confirmed or probable, Burgan said. No tick-borne deaths have been investigated.

“When going to your local doctor, it is very important to tell them you have come into contact with a tick,” she said. “Those symptoms can be anything.”

Burgan said some patients have gone to local doctors and were told the symptoms showed signs of the flu, so the symptoms would get worse and worse for the patient and they would have to go back to the doctor and get tested.

“There is no way of telling what kind of tick it was that carried the infection,” she said. “However, Rocky Mountain spotted fever is what we’re seeing most of with the cases we are currently investigating.”

Although there is no way of identifying what kind of tick transmitted the infection, a deduction process can be utilized because the spotted fever is primarily carried by the American dog and lone star ticks.

Research shows that ticks are drawn to anything from vibrations to body odor, so they sense when people are walking toward them. Burgan said they can be found in grass and wooded areas, where a lot of people spend their time in the summer.

“It is very important that people spray their clothes as well as their skin,” she said.

Some ticks attach almost immediately and some do not, she said, because they are attracted to hard-to-reach spots on the body and places people tend to not groom as much, such as the back, the waistline and behind the ears. Avoiding these grassy areas is essential.

The Environmental Protection Agency has registered a spraying repelling product that repels all ticks as well as mosquitoes. Residents can go online to find out which repellent is best suited for them.

This EPA-certified product is also available to purchase online at www.epa.gov/insect-repellents/find-repellent-right-you. For more information on this epidemic across the surrounding counties, visit www.lincolntrailhealthdepartment.com.

By John Singleton
The Kentucky Standard