BOTH INDIVIDUALS  BELIEVE  HEALTH CRISIS INCIDENT AND WAY IT PLAYED OUT WAS “DIVINE INTERVENTION”; PAIR HAS SINCE BONDED AS “FRIENDS FOR LIFE” OVER LIFE ALTERING SITUATION 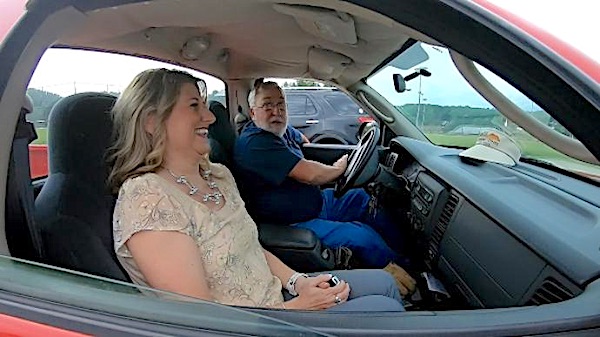 The January 9, 2019 medical crisis is a day that Mary Hall and Raymond Dixon Jr. will not ever forget.; and since then became best friends united by the spiritual guidance of their mystical intervention.

It started out a normal routine that day for Mary Hall, as she was driving home from a work meeting in Hazard, Kentucky. Hall was driving along U.S. 23 when she suddenly started to feel sick.

“It kind of came on quickly,”  Mary Hall said of the sudden medical crisis that had stricken her. “It was like everything was very distant. Dizziness, blurred vision. I wasn’t really hearing well.”

So Mary Hall pulled over into a stranger’s driveway, hoping someone would be home that could help her.

“I pulled over into his driveway, not knowing him or who lived there,” Mrs.Hall said of her unknown soon to be her savior.

The man that happened to be living in that house where Mary Hall stopped was Raymond Dixon, Jr. He was looking out his kitchen window that day when he saw Mary Hall pull into his driveway.

“She got close enough that I could notice that she was a lady,” Mr. Dixon stated. “I could tell she was trying to use a cell phone.”

Mary Hall was trying to call her husband, but she couldn’t remember his phone number.

“I asked her if I could help her. I could see she needed medical attention,” Dixon said.

So at that moment, Raymond Dixon loaded Mary Hall up into his pickup truck and rushed her to Three Rivers Medical Center. Once inside the ER, though, Mary Hall’s mystery medical crisis took a drastic turn.

“I started having a seizure,” Hall said. “After the doctors did some testing, it was determined that I had a brain tumor and I was airlifted to UK Hosptial in Lexington where they performed an emergency removal.”

Amid so much uncertainty for several days, Mary Hall says she finally got the news she was waiting to hear.

She and Mr. Dixon still remain friends. She calls him her hero for saving her life that day.

“I am very thankful for him and very thankful to God,” Mary Hall stated . “I do believe a lot of things happen for a reason and that it was a bigger intervention. Big hands were in this. It was a terrible experience, but it was a wonderful experience in a lot of ways.”

Mary Hall calls Raymond Dixon Jr. her hero, which is why she nominated to be WSAZ’s Hometown Hero, an award handed out by the Huntington, West Virginia television station routinely to local residents in the region who nominated by others for actions of unique and exceptional valor that they do for their local community.

These two people, who were once total strangers, creating a bond. One they both credit to a higher power.

“I believe God was in it,” Raymond Dixon said. “I don’t feel like a hero. I just feel like I was in the right place at the right time. I think it was all God’s plan.”

Mary Hall says she had a follow-up appointment at the end of April with her doctor. She says her doctor says all her tests came back normal and that she doesn’t need to return for a year.