Commits to University of Kentucky as a rising sophomore...

Louisa, Ky.  — Lawrence Co. left handed pitcher and soon to be sophomore Bryce Blevins has committed to the University of Kentucky after a stellar freshman season for the Bulldogs who went 35-6 and captured the 15th Region Championship.

Blevins has been pitching at the varsity level since he was a 7th grader and went 7-1 on the mound this season. 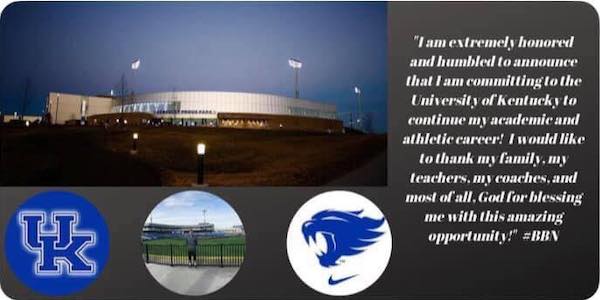 “… Ever since I was a little kid I have wanted to be a Kentucky Wildcat getting this opportunity is more than a blessing, since I was that little kid, I looked up to Steven and seeing all the big things he was doing and now that I get the chance to do the same type of stuff he does, it’s just amazing. I’m more than excited to represent my home state and to play in the best conference the SEC.”

“… I’d also like to thank all my coaches at Lawrence County. Coach Feltner is the best Head Coach in the State of Kentucky and Coach Steven Blevins could be coaching college pitchers. I’m blessed to be a small part of the most PREMIERE program in all of Eastern Ky. I’d like to thank my parents and my maw and pappy for all their support. Couldn’t do it without all of them.”

“… Bryce is an extremely talented young man but more so than his talent his work ethic is top notch. That seems to be the key ingredient right now with Lawrence County Baseball. We’ve been blessed with guys that are willing to sacrifice and get after it. Bryce is right out at the front with that. This is a huge honor for him with the chance to continue playing at the highest level in the country post high school. This guy is a killer competitor and he understands all to well that the work will just now begin for him So excited for Bryce and his entire family.”
Chat Conversation End
Type a message…
ShareTweetShareSendPinShare
Next Post

CHURCH GROUP TO HOST 'FUN AT THE PARK' DAY