GROWING UP IN LOUISA… Odiferous Memories

There are things from our past that we often don’t think about, or we may push aside until circumstances resurrect memories. They may be absent for decades before we stumble across an environmental circumstance we had long forgotten. In my experience it may be a haunting thing when suddenly, like Deja vu, we encounter a stimulus that washes our soul with haunting memories of things of the past. These things explode into our minds brought on by a specific scene from our past. Perhaps it is a sound such as a particular song, or a certain smell we recognize from our past. Suddenly, memories flood the soul.

An avid reader shared with me his experience of running into certain odors that stirred his memories. His recollection encouraged me to turn my attention to the smelly things in life. I could identify with those and sundry other aromas as I figuratively thumbed through those dusty files still available within my old brain. Some were pleasant, such as mom’s shampoo, or a cake baking in the oven. Some were not pleasant, such as a dead and decaying mouse, or the smells of a barnyard. Then again, what is pleasant or disagreeable to one may be the opposite for another.

All of our senses are especially acute during our youth because our bodies are new and we haven’t had time to destroy them with ill-living. We also are learning about warning signs that something may or may not be suitable to eat. That was especially important during the time before good refrigeration. With humans and dogs alike, nothing supplants the importance of the sense of smell. We associate various odors relating to our experiences with a feeling of security, of home or the classroom, or our daily environment in general. We always remember what grandmother smelled like, and we’ll never forget the aroma of freshly fried chicken. 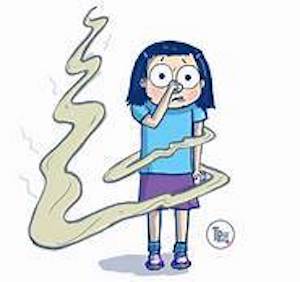 Even when I was but a toddler I remember the smell of milk warming for my next bottle. I suppose, like Pavlov’s dogs, I began to salivate at the thought of my next meal. We were still using an ice box in those days which was just after or nearing the end of WWII. I remember the smell of clabbered milk that would hit me when mom opened the door to the icebox. We all knew at once when the milk had gotten warm and gone sour. Yes, I remember the smell of the water tray below the shrunken block of ice, too. It was time for the ice man to install a fresh supply. It should come as no surprise when we turn a corner, open a door, and get a whiff of a familiar odor that we find ourselves in another place and another time.

I recall the choking smell of chalk dust from the blackboard erasers in our grade (elementary) school. I know I was sent out more than once to pound those erasers against a concrete wall just behind our school resulting in making clouds of dust. The marks on the cement proved that others had been there before me. I guess the next rain washed the powdered remnants away only to be repeated on another day. Pounding them was necessary to make the erasers functional because too much chalk would built up and it would spread the dust over the slate blackboard instead of cleaning a spot for the next lesson.

I remember the classrooms of old also had pencil sharpeners that were full of wood shavings and pieces of graphite. Someone smarter than me had the sharpeners installed directly above the trash can. Once the built-in container was removed and dumped in the trash the smell remained strong. It even clung to my fingers until I eventually washed my hands. 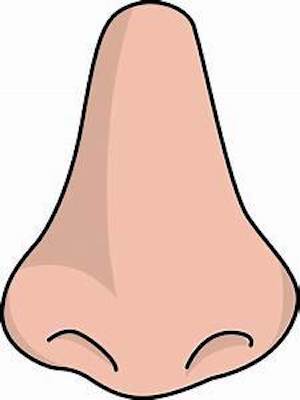 We also had mimeograph machines that also had a foul odor to accompany that nasty purple stain that was sure to color my hands, arms, and clothing. Even the bottled glue had a smell of its own. Back then there was an old practice of oiling the wooden floors throughout the schools. Even if we had been led blindly, we would know at once where we were. While I didn’t often eat in the grade school lunch room, I loved the fragrance of hot rolls baking. That delightful, but invisible cloud circulated and wafted through the building many mornings as the lunch hour approached. I had not been hungry before, but suddenly the gastric juices were flowing and I couldn’t wait for lunch break.

High schoolers will remember the delightful lunch-time smell of hamburgers cooking at the Hamburger Inn, Lula Bells, or Rips. Along with the aroma the loud juke boxes were fed coins to ensure we would not eat in silence. Fellow classmates jockeyed for a seat usually in groups of kids by gender.

I remember when mom had some home-made bread baking in the oven. While we mostly used “Heiner’s Bread” that had been bought from a local store, I also remember passing Heiner’s bakery in Huntington just as the bread was rising. The rising yeast permeated the neighborhood.  It was heavenly! 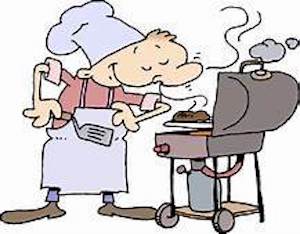 I also enjoyed walking into the grocery store when just as they were grinding fresh coffee beans for a customer. That big red coffee grinder that sat on the counter flooded the store with a great aromatic cloud that teased my senses. I didn’t like coffee itself, but I loved that great smell when grocer Ed Bradley filled someone’s order for fresh ground coffee. Even then coffee was a big business, but today we take it to new levels and pay crazy prices for specialty drinks.

During summers I sometimes stayed on my uncle’s dairy farm and helped where I could. There were many specific scents that were peculiar to farm life. I helped collect eggs a few times and recall the smell of chickens and the straw that was used for bedding. I remembered that smell years later when I had a pickup load of chicken manure and had to cross a river by ferry. It was summertime and the temperature was in the nineties. The other riders on the ferry were not pleased we had joined them with our uncovered load of fertilizer. I stayed in my truck and ducked down. Because of the heat and no air conditioner, we had been driving with the windows down. Subsequently, we were covered with the dry flakes until my wife and I looked like a pair of mummies. Boris Karloff never looked so good! In the end my garden was happy with the nitrogen, but I vowed never to carry manure again onto a ferry.

I remember the smell of bales of hay piled high up in the barn loft. The milking parlor down below had its smells, too. Lime was one, but the cows were happy to add to the atmosphere with some smells of their own. I was given the privilege of shoveling and sweeping up their odiferous offerings. I stood ready until one raised her tail. I’d run with my shovel in hopes of catching what was to follow before it covered the parlor floor. My percentage of success wasn’t high.

Even the river bank has its own aroma. While it gave off a decayed, or foul stench, it was similar to oysters, which today I so enjoy. While not all smells are unpleasant, all tend to become associated with our memories. Consider the smell of a locker room filled with dirty, sweaty uniforms, or the stench of a well-worn pair of tennis shoes. Even a pair of cowboy boots can be offensive, but then again, we loved those boots, didn’t we? 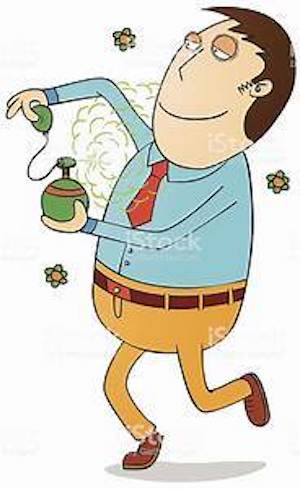 Whenever I went into a musty basement or a cellar, I had to notice that it had an identifiable smell. I also remember the freshness of summer rains when the drops hit the dusty ground. I remember the perfume counters at the department stores. They always tempted me to stop and sample. Mom showed me how to spray a bit on my wrist and then take a whiff. That would remain with me though most of the day. I was careful to only test the few available ‘men’s’ aftershaves. I think Aqua Velva was one brand and Old Spice, another. Men were just starting to use these products, most still thinking it was beneath their masculine character to use odor enhancements. The only ‘smell-good’ men usually got was at the barbershop, but a bottle was a cheap Christmas gift from the children. Opinions softened with time.

Even the hardware stores, with their oiled floors, bags of seed, and other products had their unique and distinct odors. I could shut my eyes and know where I was. I remember sawdust in wood shops, the oily smells of filling stations, and the unique smells of wood or coal-fired stoves. I remember the smell of pipe smoke. I enjoyed smoking pipes for years. I remember the smell of a carnation worn at a school dance, and popping corn at the dime store or newsstand. Growing up, smells were everywhere.

Considering that the railway split the center of town, we could not escape the smoke and cinders from the freight and passenger trains that rolled emitting clouds that would finally settle a blanket of black dust on the porches and sidewalks. I was taking my children for a ride on the narrow-gaged train at Dollywood when I was hit by a childhood memory. We were in an open car when that first whiff of smoke flooded me with memories. In a strange way it took me back to those early days in my little town, when steam engines were common. It felt good to me and a bit comforting. For a moment I was at home, as a child, basking in memories and emotions I had experienced so long ago. It was delightful to me, but the kids thought it was an awful smell. 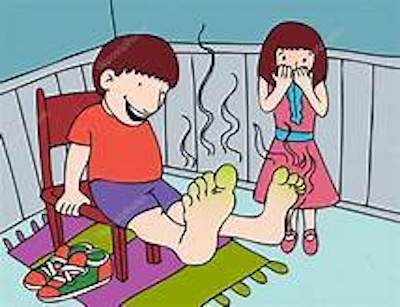 Walking though the mid-way of a carnival incites memories. I suppose it is the sausages, French fries, fried chicken or hot cider emitting from the various booths. We remember the smells of the holidays. Whether the greenery of Christmas, the hamburgers and hot dogs of summer, or the candy bunnies of Easter, we remember. We’ve likely enjoyed the odors of cooking a turkey, a tray of cookies, or maybe a ham. How good can it get?

My point is that our memories have foundations that emulate from all of our senses, but the sense of smell is perhaps the strongest of them all. The atmosphere of places with certain smells stir up mental pictures of other days. Some will be pleasant like the ‘new car smell,’ while others may remember the fiery destruction of a barn, or the family home. Thank goodness, most will take us back to those early days of our youth. Whether it may be baby powder, an oiled baseball glove or mitt, a favorite meal, or even the fragrance of grandpa’s pipe, they conjure up another visit to the past. The list of smells is without limit. As you ramble through life keep those olfactory nerves tuned. You will be able reap the benefits of those personal, unique moments that are so special.              mcoburncppo@aol.com