LCHS TEACHER TO LEAD ANOTHER GROUP OF TRAVELERS ABROAD IN 2020

KCTE/LA Teacher of the Year Scott Osborn is no stranger to travel. As a child growing up in the 1970s, his father’s work in the oil industry took their family from places as different as far-flung Singapore to Glasgow, Scotland.

Since 2001, he has been a travel educator for EFTours, the Global Leader in English Language and International Travel Education.

“My first joint LCHS-EFTours trip was a week in southern and western England, and it was just the start of something beautiful,” Osborn said. “Since I took that little group of nine Lawrence County teenagers, I’ve led a group overseas roughly once every four or five years. My colleague Romana Short has also led a couple of trips as well, and we feel blessed to have been able to do this.”

Mr. Osborn stresses the value of travel, which he sees as “opening windows of possibilities” for students that they might not otherwise see.

He also praises the sponsoring company, EF (Education First) Tours, with whom he has worked for almost twenty years now.

“EFTours has simply been incredible,” Osborn stated, “from offering the best prices and service, to packing in the most educational value you could hope for in a trip of this caliber–no matter the destination. They have consistently given us the greatest flexibility, travel security, and learning opportunities; they in turn truly value the relationship they have with Lawrence County. If I ever retire, they want me to find a replacement–they don’t want to lose us!”

Offering English language to businesses and extraordinary travel opportunities to schools for over fifty years, EFTours has its main headquarters in Sweden and its US headquarter in Boston, Massachusetts, with hundreds more field offices across the globe. In addition to being the official English language training provider to the Olympic Games, EF is also the worldwide leader in travel education, offering tours to almost every corner of the planet, tailored to age-levels ranging from middle school to adult. 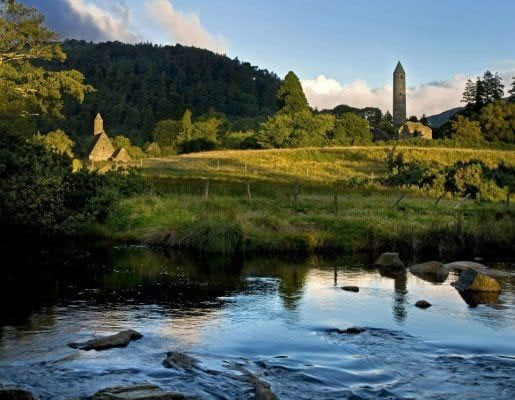 David Prince, a former Kentucky Social Studies Teacher of the Year and LC’s very own Laid Back Country Picker, traveled to Scotland and Ireland with Osborn, former Business Teacher of the Year Romana Short, and a group of LCHS Bulldog students 12 years ago. He agrees with the value of travel for our young people.

“Experiencing historic landmarks and distant lands,” Prince says, “is education in its purest form. It expands the mind, the heart, and the imagination all at once.”

The planned 2020 tour is a version of the 2007 custom tour, which travel leader Osborn designed himself. That tour allowed students to sample just a little of their Irish, Scots-Irish, and Scottish heritage. Osborn hopes this tour, which is very similar, will do the same–and hopes even more.

“Celtic Pride, County Wide,” Osborn said. “That’s my motto for this trip. Besides inspiring just the student and adult participants who travel to these places with us, we want to inspire the entire community. It is my hope that folks will more quickly recognize and openly embrace this region’s deep connections to Ireland, Northern Ireland, and Scotland. I want everyone to be more curious and eager to learn about their roots and their proud heritage.”

Osborn is no stranger to that heritage, either. He and his wife, Jenni, have been doing research on their respective families for years, and each of them have uncovered strong Irish, Scots-Irish, and Scottish roots. “My wife has a lot more pure Irish than I do, but we both have a lot of Celtic genes in our double helixes–DNA testing has confirmed it. So yeah, I’m extremely proud of my Scots-Irish, Scottish, and Irish heritage.”

The LCHS English teacher and local union president hopes to raise awareness about Eastern Kentucky’s strong historical and cultural ties to a long downtrodden but extremely tough and exceptionally innovative part of the world, one that appears to be rising from a tragic past.

“Ireland and Scotland have given us more than just millions of immigrants and millions more of their descendants,” Osborn explained. “Those countries gave us so much of our music–the fiddle, for one thing–our storytelling tradition, and our fighting spirit. The Celtic ethnic groups from these regions have fought bravely for freedom on every battlefield in every war America has ever fought–and they’ve resisted those on our own soil who have
tried to exploit regions like Appalachia and oppress their people.”

Osborn also pointed out how it was the Irish who gave us the modern tractor, the Transatlantic telegraph, the submarine, and so many other precursors of the modern age; Irish literature remains one of the world’s greatest bodies of work as well. Generation of Scots-Irish descendants (who trace their lineage back to Northern Ireland and the Scottish Lowlands) from Andrew Jackson to Ronald Reagan have led our nation. And Scotland gave us the basis of modern economic theory, the character Sherlock Holmes, the sport of golf, television, and Auld Lang Syne.

“Whether cultural, literary, scientific, technological–whatever the field,” he continued, “these nations have given us so much. Sometimes, the people of Appalachia and other regions dominated by Celtic lineages feel pretty bad about themselves. But if you peel back the layers of history, you find stories of incredible endurance, faith, resistance to tyranny, innovation, and creativity.” “I’m hoping the preparations for this trip, the trip itself, and then the discussions and sharing that follow our return will remind us of those deep-rooted stories.”

Taylar York was one of the LC students who toured these regions on the last Celtic study abroad trip of the kind. She had this to offer: “ “The Ireland/Scotland trip sparked my love for travel. It is a wonderful opportunity for students in this area to experience a world outside of our small town. It also gave us a chance to explore our heritage as many people from Appalachia have Scottish and Irish roots.”

Whitney Johnson, another LCHS graduate, was also there. “This was an amazing experience for a group of small town Appalachia students to go across the pond and immerse themselves in a different culture,” she shared. “If you had told me when I was a sophomore that I would be given an opportunity as a junior in high school to travel outside of the country, I would not have believed you. I am so grateful for the opportunity we were given and this trip continues to resonate with me to this very day.”

Lawrence County alum Allison Ballard still feels gratitude for the experience. “I’m very grateful I had the opportunity to be immersed in another culture at such a young age. I won’t ever forget the history we learned and the beautiful land we saw. I hope that there are many more groups from Louisa, KY, who have the opportunity to travel abroad like we did.”

Added David Prince, who served as a chaperone on the last Scottish-irish trip, “The trip to Scotland and Ireland remains one of the highlights of my teaching career. The common experience shared between the students and myself created bonds that will last a lifetime.”

The current “Celtic Pride” trip is planned for March 15-March 22, 2020. 2019-2020 LCHS students who wish to participate must have a minimum 2.5 cumulative GPA, good attendance, and be willing to work together to raise the funds and attain the sponsorship necessary to make these experiences a reality.

Adults from the community are also welcome to participate. Any who are interested should contact chaperone Joey McClanahan on Facebook or Scott Osborn on Facebook or at Scott.Osborn@lawrence.kyschools.us . Regular planning meetings will be held the third Thursday of every month in the evenings at LCHS.