GOFORTH KEEPS SWINGING DOWN THE STRETCH; 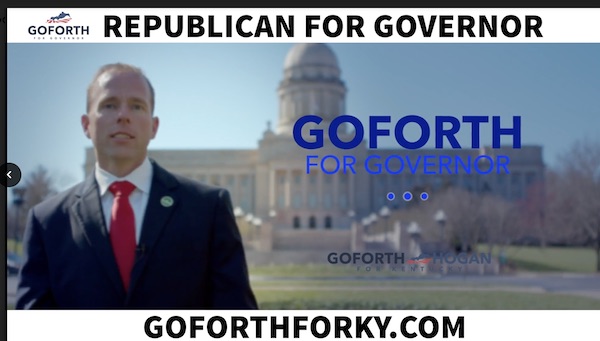 Goforth, and his running mate, Lawrence County Attorney Mike Hogan, begin a three-day pre-election statewide media tour on Thursday that will conclude on Saturday with campaign rallies in their respective hometowns of Louisa and London.  The Goforth Campaign has experienced a tremendous surge in support as the campaign enters its closing days.  Goforth has been victorious in numerous online polls, including Matt Jones’s Kentucky Sports Radio Twitter poll where Goforth received 52% of the more than 10,000 votes cast.  The Goforth Campaign’s internal polls also show support for Goforth surging, with Governor Bevin double digits below the number the recent poll the Bevin Campaign touted this week.

“Bevin won’t debate me because he’s nationalizing this election instead of talking about Kentucky’s tough challenges—he’s deflecting because he knows that I’ll expose him for the fraud and phony that he is,” Goforth told Jones.

Goforth again challenged Bevin to a last-minute debate and blasted the governor for “completely failed leadership” regarding his approach to Kentucky’s pension problems.

“This governor has given us completely failed leadership when it comes to our pension problems, and he can’t even get the votes among Republican legislators to call a special session because they understandably just don’t trust him,” Goforth said.

Goforth pointed to a recent opinion from Franklin Circuit Judge Phillip Shepherd, who ruled last week that the Bevin Administration illegally withheld an actuarial analysis of the governor’s original pension plan from the public.

“While we do have challenges to fully fund our pensions, specifically KERS non-hazardous, it has now become stunningly apparent that Matt Bevin has in large part manufactured an unnecessary sense of alarm in an attempt to suit his ideological agenda and allow his hedge fund manager buddies to continue to reap hundreds of millions of dollars in management fees off the backs of Kentucky’s taxpayers,” Goforth said.

Goforth pointed out that Judge Shepherd wrote in his opinion that the actuarial analysis withheld by Bevin incredibly reveals that it would take an extra three years longer to fund the retirement systems under Bevin’s original plan than it would if no changes were made to the current retirement systems.

“With each passing day, the shameful deceit becomes more apparent.  On May 21st, Kentucky Republicans have a chance to right the wrongs of the last four years by electing a fresh, bold conservative that can win in November.” Goforth said.

PD for by Candidate