Louisa, Ky — Lawrence Co. ( 30-5 ) has an outstanding baseball program but after an 8-1 victory over Russell ( 15-16 ) Wednesday on Cal Ripken Night at Randy Keeton Field, the 2019 Dawgs are the first team in school history to win 30 games in the regular season. 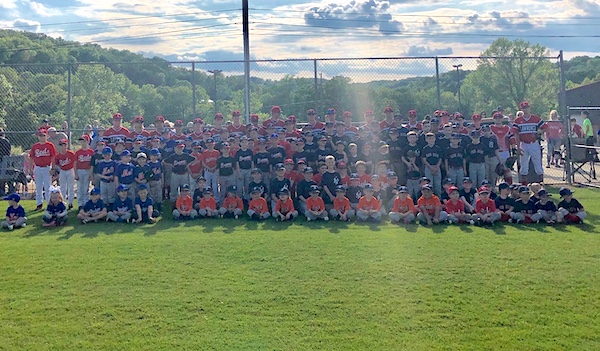 Senior Lucas Maynard went the distance and threw only 68 pitches and allowed zero earned runs to get the victory.

The Dawgs honored four seniors and then went out and mercy ruled the Dragons in five innings.

Jackson Feltner hit his 12th homer and finished with 3 hits he also doubled and had 4 RBIs, Bryce Blevins went 3-3 and drove in 3 runs, Senior Austin Roe had 2 hits and 1 RBI, Tyler Maynard had 1 hit and 1 RBI, Senior Hunter Crum had 1 hit.

Jacob Fletcher went the distance on the mound to get the win.

In the second game of the Senior night doubleheader the Dawgs made quick work of the Cardinals who fell to 17-11 on the season.

CJ Fairchild went 4 innings on the mound striking out 8 and only allowed 3 hits to get the victory. He also had 2 hits to aid his own cause.

#1 seed Lawrence Co. will open up the 58th District Tournament at Randy Keeton Field on Saturday at 4:30 against #4 seed Betsy Layne.

Sheldon Clark will host Shelby Valley tonight to close out the Regular season.

“… Man, it’s a special group of young men (seniors). Forget baseball for a minute. These are all fine character individuals. They’ve sacrificed a lot thru the years and have learned how to develop great work ethics. I believe in all 4 of them, they are going to turn out right and become productive citizens. I love each and every one of them. They’ve been a big part of my own family. I Told them before the game, this is a senior night I’ve been dreading my own son has grown up with these kids and I’ve seen them since t-ball. Couple of these guys have had to endure a lot at a young age with sickness and loss in their family and they’ve had to grow up quicker than most.”

“… I’d put my name behind all 4 of them any day. Just really proud of them
By the way, they’ve been unreal on the field. 108 career wins. 3 district titles, and some unfinished business in the Region Tournament.”

“… We played well tonight against Russell. Lucas is a stud on the mound. He’s been amazing all year. CJ hit a bomb and we hit the ball well. 30 wins in the regular season. We’ve never done that. Amazing year so far. Man it was amazing. I was blown away by it. Unreal turnout for Youth Night.”