Electronic Poll Books To Be Implemented Across the Commonwealth In Limited County Roll Out For May 21, 2019 Primary

FRANKFORT, Ky. (May 7, 2019) In conjunction with county clerks and election day poll workers the State Board of elections will be implementing Epoll Books in a limited county roll out during the upcoming statewide primary election on May 21st of this month. This will be the fourth election in which the Commonwealth has used Epoll books in a phased roll out. During the May 21st primary election Epoll books will be used in approximately 1,792 precincts in 107 counties.

He said the system is designed to make the “sign in” process easier at polling places. Instead of waiting in line for the poll worker to look up your name and place to sign, you will be swiping your drivers license or signing your first three letters of your name to be recognized by the EPoll system.

“We tried it in two precincts during the last election and had no problems with it,” Jobe said. “They seemed to like it because it makes things much faster.”

During previous elections, Epoll books have shown to decrease voter check in times from an average of over three minutes to under 45 seconds. The use of Epoll books will also lead to thousands of dollars of savings to the tax payer as the State Board of Elections moves to implement Epoll books across the Commonwealth in the coming election cycles.

For more information about Epoll books or to find out if Epoll books will be used in your polling location during this election, please reach out to your county clerk’s office, or contact the State Board of Elections directly at (502) 573-7100. 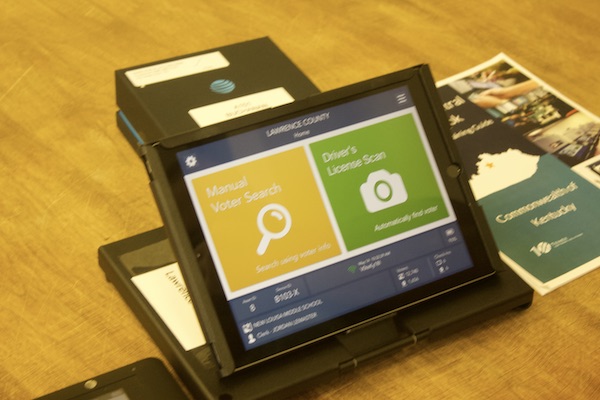