NO TRACE OF EASTERN KENTUCKY TODDLER WHO ‘WANDERED AWAY FROM HOME’ 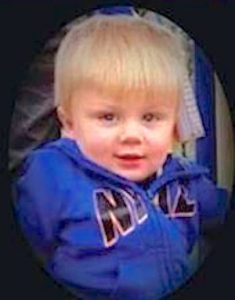 Crews in Magoffin County have found no sign of the 22-month-old boy who went missing Sunday night, according to the rescue squad leading the search.

The boy’s dad was sitting on the front porch of the home and Kenneth got out through the back door, said Robert Prater, director of Magoffin County Emergency Management and a friend of the family.

As of 6 p.m., almost a full day since Kenneth went missing, crews had found no sign of the boy, said Ritt Mortimer, public information officer for the rescue squad.

“It’s a bad situation. It really is,” Prater said. “For a child that size to be gone this long, it’s rough.”

The South Magoffin Fire Department was called directly by Kenneth’s family after he went missing, Mortimer said. The fire department searched for about 30 minutes without finding the boy. A call was then made to emergency dispatch and that alerted the rescue squad, Magoffin County Sheriff’s Department and Kentucky State Police, Mortimer said.

The search has been concentrated in the southern end of Magoffin County about one mile from the Floyd County border, Conley said.

Two helicopters have also been used in the search, said Mortimer.

The search from the rescue squad was called off around 7 a.m. so crews could regroup and get more help. Their search resumed around 11 a.m. Monday, Conley said. He is not asking the public’s help searching for Kenneth.

“We have experienced people right now and that’s what we are relying on. We are using our trained resources,” Conley said.

Prater said there has been an outpouring of friends and family trying to help. Kenneth’s family is tore up, he said.

“Not knowing where he’s at, not knowing what happened … everyone is trying to be optimistic,” Prater said. “They’re hoping for the best.”