As a community we have pulled together to help our neighbors many times.

In fact it has become the reputation of Louisa and surrounding towns. One local charity first known as “Ride for Ryan” is no exception and in its fifth year as a successful event.

Darrick “Ryan” Haywood passed away April 4, 2015 at the early age of 3 from an illness known as Severe Pulmonary Stenosis along with AV canal defect, and 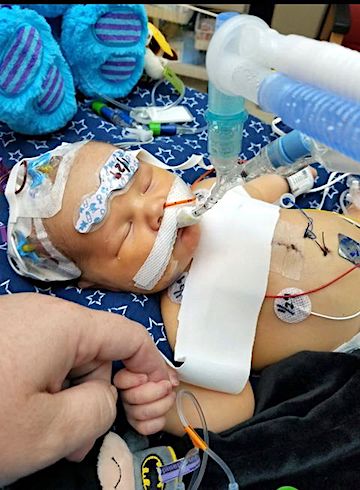 Heterotaxy Syndrome. The primary cause for the charity ride at that time was to raise money for his funeral expenses and went on to raise awareness of the diagnosis that took the life of young Ryan.

Because of the success of the ride, the family and committee for this event decided to use the resources to help other families and adding to the name of the event “Ride for Battles” in memory of Ryan.

This year on May 11 the ride will continue, however, all proceeds from the ride and other events taking place on that upcoming date will go to young Benjamin Scaggs. Ben is the one year old son of Carrie Scaggs from Louisa. Ben has been diagnosed with Hypoplastic Left Heart Syndrome.

Scaggs said her son has just started walking with no help.

“He is a true warrior and loves to be outside playing.” She added that he loves playing with his toys, and music. “He loves music. His memew and ol’paw are his favorite people. He loves people but can be a little shy at first, but he has a smile that lights up the room!”

The committee for this ride hope that a big turnout of riders and supporters can relieve the family of some of the financial strain so they can focus even more on Ben’s health.

The annual event will take place in the Old Foodland parking lot Saturday, May 11 starting at 11 am with sign ups for the rise beginning at that time. Those interested in riding in the event will have until 1 pm to get their fees paid. Those fees this year will be $10 per bike and $15 for double riders… other events that day will be door prizes, concessions, and best and worse hand for the poker run. T-Shirts will be available for those wishing to purchase one for 10 dollars.

“It’s so much appreciated that every year we have those volunteers who donate their time to make this event a success year after year,” said Shasta Evans, Grandmother of Ryan. “We appreciate the bikers, who take the time out for this event and other events they do in the area to help our children and their families.”