SUSPECT IS NOT MISSING BOY FROM SEVEN YEARS AGO: ARRESTED BY POLICE

Brian Rini, the Ohio man who claimed to be Timmothy Pitzen, an Illinois boy who went missing in 2011 at age 6, has been charged by the FBI with making false statements to a federal agent, according to the FBI and U.S. Attorneys.

According to federal agents, Rini claimed to be Timmothy and had escaped from his captors after years of sexual and physical abuse.

Rini wanted to get away from his own family.

According to the FBI, Rini told investigators he heard about missing boy Timmothy Pitzen on TV’s 20/20, and said he wished he had a father like Timmothy’s. Officials said a rerun of the show had been aired in the last several weeks.

U.S. Attorney Ben Glassman said Law enforcement responded to the situation “exactly as you would hope they would,” contacting other federal and local law enforcement.

A Cincinnati police officer working with the FBI task force spoke to Rini who insisted he was Timmothy Pitzen until confronted with DNA evidence.

Glassman said Rini had twice before claimed to be a victim of child sex trafficking. In those case, his fingerprints were used to unravel his lies, Glassman explained.

Glassman said the search for Timmothy is still ongoing.

“My heart goes out to the family of Timmothy Pitzen,” Glassman said. “I can only imagine the pain they’ve been through.”

Herb Stapleton, a Cincinnati FBI acting special agent in charge, said, “false reports like this one can be painful to the families of victims,” and also waste valuable law enforcement resources.

Stapleton said FBI agents had been speaking with Timmothy’s family during the investigation this week.

Stapleton’s counterpart in Louisville, Robert Brown, said the outpouring of support regarding this case “gives everyone hope” that Timmothy will be found.

Sammarco said Rini’s DNA was compared to the DNA of Timmothy’s parents. When that didn’t match, Rini’s DNA was entered into law enforcement databases.

Sammarco said this case has been difficult because “there’s no greater win for law enforcement than to find a missing child.”

Glassman said law enforcement “moved heaven and earth to determine if they had found a missing child.”

“I think there were suspicions relatively quickly,” he said, but the priority was to “ensure that under any circumstances a victim is getting the care they need.”

Glassman said the investigation into Rini is ongoing.

According to court documents, federal agents said Rini refused to give his fingerprints after he was taken to Cincinnati Children’s Hospital. Eventually, he did agree to do a DNA swab, which was submitted to be compared with Timmothy’s parent’s DNA and against an FBI database.

The documents said the DNA provided indicated Rini “could not be related to Timmothy Pitzen’s parents.” The FBI database returned a hit for Rini.

After confronted by officers with his real identity, Rini said he heard Timmothy’s story on ABC’s 20/20.

“He stated that he wanted to get away from his own family. When questioned further, Rini stated that he wished he had a father like Timmothy’s because if he went missing, his father would just keep drinking,” the complaint said.

Officials said Rini appeared in federal court around 11:15 a.m. Friday and he is currently in the custody of U.S. Marshals. Rini could face up to 8 years in federal prison, according to U.S. Attorney Ben Glassman. 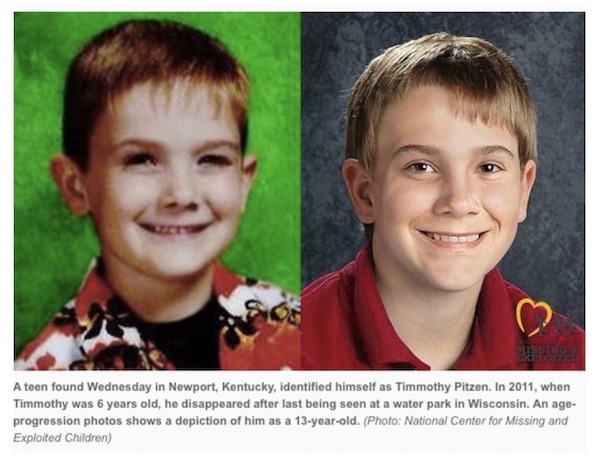 A teenage boy who was found by police in Newport said he is Timmothy Pitzen, who disappeared in Illinois seven years ago.

Police are working to confirm the boy’s identity and have not publicly named him.

Sharonville, Ohio police, who assisted in the investigation, released a report Wednesday afternoon.

The Sharonville report states the teen identified himself as Timmothy Pitzen, who went missing in May 2011, when he was 6 years old.

Police initially responded Wednesday to the 740 block of Columbia St. in Newport, according to police audio of the incident.

A caller stated “he’s with a 14-year-old juvenile … said he was kidnapped from somewhere.”

The teen was identified over the audio as Timmothy Pitzen, and law enforcement discover the name is linked to a missing person out of Aurora, Illinois. They contact the Aurora Police Department.

At one point, a law enforcement official says the boy’s date of birth: “10-18 of ’04” and then repeats the same date.

A note left behind stated Timmothy would never be found, but that he was safe and being cared for by a loved one, according to CBS Chicago.

Timmothy, originally from Aurora, Illinois, was last seen at a water park in Wisconsin Dells, Wisconsin, according to the National Center for Missing & Exploited Children.

Timmothy’s car seat and Spider-Man backpack were missing from his mother’s vehicle, the Associated Press reported after the disappearance. Credit card receipts showed she purchased children’s clothing and toys before her death.

According to the Sharonville report, the teen said he had just escaped from two kidnappers, who had held him captive for seven years.

The Aurora Police Department said in an emailed statement that two detectives traveled to the Cincinnati area to assist the FBI in the missing-person case.

“We cannot confirm that the person of interest here is Timmothy Pitzen,” wrote William Rowley, a spokesman with Aurora police. “At this time we have no further information to provide.”

Sharonville and other local agencies were asked to search Red Roof Inns and other area motels after the teen claimed he’d been held in one, the report said.

The teen told police he escaped his captors and proceeded to run across a bridge into Kentucky. The exact location was not stated.

Newport Police Chief Tom Collins said his department received a call of a person “walking around the east side of Newport and didn’t seem like he belonged there. … Things didn’t look right.”

Collins added, “You can only imagine the challenges we’re going through in the process of identifying who he is.”

Law enforcement has not released any details about possible arrests in the case.

However, the report states the teen described his kidnappers as two men who are strong in stature, one with a spider-web tattoo on his neck and the other with a snake tattoo on his arms.

They drove a newer Ford SUV with Wisconsin plates, according to the report.

The Federal Bureau of Investigation office in Lousiville confirmed it is working with officials in Newport, Cincinnati, Hamilton County and Aurora on a missing child investigation Wednesday.

“There will be no further statement made on this matter until we have additional information,” Louisville FBI said.

The boy was taken to an area hospital to be checked out and police say he is being interviewed by detectives and other uniformed officers.

The National Center for Missing and Exploited Children posted an age-progressed photo of Timmothy, which provides a depiction of his appearance as a 13-year-old.