Back in 2011 I wrote an article pertaining to some of what I remember about the big auditorium that took up a lot of the second floor of our old high school building. I am going to update those memories as best I can since it fits with recent articles I’ve produced. This thing I remember best was the last time I was in that building just before graduation in May of 1960. School was already out, but it was a time that band members had to turn in their uniforms and school-owned instruments. I had been in the third floor band room doing just that. Turning that in was the end of my high school career and the beginning of the unknown, at least for me. It was as if everything I knew was now in the past. Feeling altogether nostalgic, I meandered down the stairs to the stage level of the auditorium. I walked to the ‘stage left’ doorway and discovered that a couch had been left, that was perhaps a left over from a recent play.

I heard the noise and chatter from several other band members leaving, but after waiving at me they continued up the aisle and out toward the staircases in the front of the building. Everything was empty and seemed almost hollow. It was too quiet. I decided to take a few moments before exiting the stage. I contemplated sitting on the couch for a few minutes to gather my thoughts, but just then a classmate and fellow band member, Kaye Buskirk, appeared walking onto the stage. I was surprised but turned to pass a greeting just as I sat down on the divan. I think I padded the couch and suggested she join me for a couple of minutes. She seemed to be just as pensive on this occasion as me. She smiled and said she’d join me for just a minute since she had to meet someone.

As we gathered ourselves I turned and spoke of the memories this place had for generations. It would soon be torn down. The ghosts of times past would soon lose their home. One of use used the old cliché about ‘if only the walls could talk.’ Indeed, undoubtedly there were many stories over the generations of people who grew up in that place. The dusty environment lent an odor that somehow blended with the oiled wooden floors. That would always be an identifier for the location, but even that would be short-lived. The auditorium, which had its own character and spirit, would soon enough disapear.

Kaye and I spoke of several of the events we had either seen or participated in, 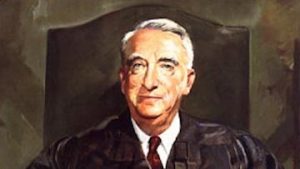 that took place on the very stage we were occupying. We had sung in glee clubs and choirs, had played in concerts and even acted in plays on this very spot. In fact, most everyone I knew, whether students or faculty, or both, had long-termed ties to this place. The former Chief Justice of the United States Supreme Court, Fred M. Vinson, had gone to school here and must have sat in several of those folding wood and iron seats pn the main floor and on the balconies.

We were often called to the auditorium to listen to guest speakers, including government authorities, elected officials, visiting evangelists, and to make important points. I think everyone will remember the time he had the whole student body march in single file down the front steps, out the door and across the grass to the flagpole and back to our seats. The point was to show why we don’t walk on the grass. The dirt path worn out by so many trampling feet remained as long as I remember. I, for one, never took another ‘short-cut’ across the grass again. 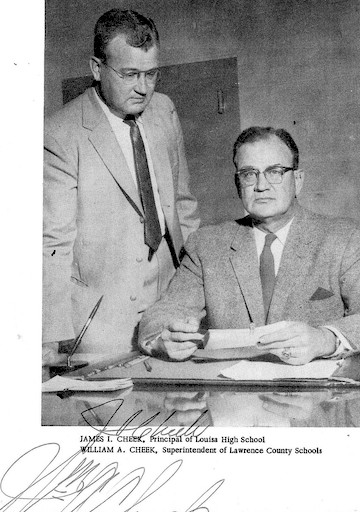 We were impressed, too, when Mr. Cheek often spoke out in support of us having high morals and strong character. While he had a bit of a serious, or gruff, demeanor he also had a heart for everyone’s learning and development. It wasn’t just about academics but he sought to address cultural and ethical questions and living a good, productive life. Many will remember when he recited from memory a poem “The Master’s Touch.” Not only did we learn a lesson about how we value things, but also a lesson on looks can be deceiving. While I had never liked memorization I saw an understandable model that morning. Strength of character sometimes shows itself best in peace. We heard bible stories and hearts were turned for many who had no other teaching resources at home.

Each year during the graduation ‘practice’ he shook each student’s hand. He expected a strong shake and eye contact, a lesson that would follow me all my life. Even today I have trouble when meeting someone and they have a weak, or reluctant handshake. Learning that has meant more to me than an ‘A’ in some course of study. Of course, both is yet a better idea.

I saw plays put on by students over the years. Many of them were a ‘scream!’ I mean they were funny. Yes, lines were forgotten and some took liberties with the script, but the audiences howled in delight. I remember at least two plays by the class in front of ours. They were almighty seniors while I was but a junior. Oh well, they also showed me how to have fun. I watched them revel with laughter and play. It spilled over all the campus but especially in front of the old building. There was Mary Eva Berry, Sue Salisbury, Janet Nelson, Carol Ann, Kearns, Myrtle Ann Walker, Mary Ruth Jordan, Dolly Lee Jordan, Jo Frances Burgess, Julia Ann Birkhead, Linda Lou Arrington, Carol Holbrook, Karen Hutchinson, and Clara Jones, Gaylord Akers, Eddie Chapman, George Douglas Lewis, William Lee Price, Jarrette Douglas Walker, and Hugh Witt all were involved with the delightful play. I have no idea the subject or genre of the production, but it was memorable to me. This was one of several plays I could fine. I hope I haven’t left anyone out.

I was in our senior play where I played the role of a police detective in a mystery. While the role was small, I tried to duplicate the persona of Sargent Joe Friday as portrayed by Jack Webb on the then weekly television broadcast, Dragnet. In the final scene I was to come on stage and solve the crime by finding a set of incriminating keys lying on a lady’s overcoat. When I came on stage coat was folded over the lady’s arm the keys were not where they were supposed to be. Sandra Adams who was supposed to be the guilty subject had put the keys in her pocket! I looked at her as if to send a silent message that I needed to find the keys. She just coyly smiled back at me with a look of ‘How you going to handle this, buddy?’ The audience was quiet, waiting for the next thing to happen, but I was unsure what I should do. Finally, I decided I must ‘man up’ and find the keys. After all, the ‘show must go on.’ I decided to frisk her, something boys just didn’t do to girls, especially in front of more than a hundred other people. Regardless, I patted her down and that sent the crowd to screaming! Some shouted in disbelief that I had dared. Of course, I found a lump which led me to reach into her pocket and extract the keys. She was placed under arrest, hand-cuffed and led off-stage. In those days you didn’t have to recite them their Maranda Rights. I’m still not sure about personal searches.

“The junior and senior plays were always good,” I was reminded by my good friend Billy Elkins. He told me, “Assemblies were always something to look forward to since you had no idea what was going to happen – like the path through the grass – and you got out of class.” 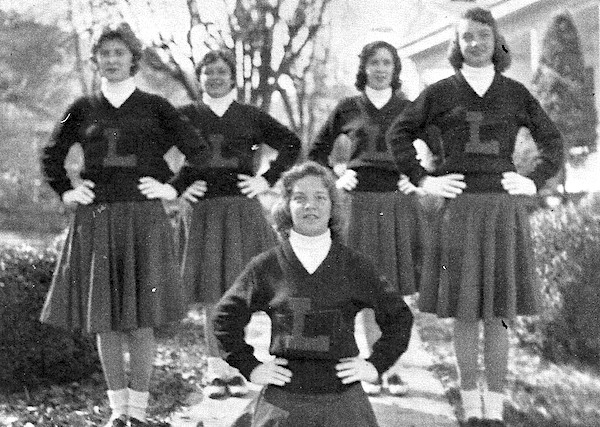 Many also recall the ‘Pep Rallies,’ with our football and basketball stars were seated together in the front, or were brought up on stage, along with the cheerleaders. We also remember when football letters and jackets were distributed with a warning from Mr. Cheek they were for the athletes and not for giving to girlfriends to wear. Of course the girls had them on before they left the auditorium. The same thing happened with class rings. It made the girls happy and marked them as ‘taken,’ I suppose. It wouldn’t surprise me if some girls had multiple rings at one time or another.

My classmate and friend Betty Hager Meade Cooke told me a few years ago that there was an annual Home Economics fashion show of garments that the girls had made. Betty had ‘sewn’ a pair of PJ’s that she had to model. She told me that they covered her well. They must have, or I missed that show. Of course, if there had been any wardrobe malfunctions I would have averted my eyes. Only a cad would do otherwise.

Before leaving the auditorium that morning Kaye and I walked out together, but we did pause to look back one last time. Then, looking to the future I asked her out to the movie. In her mind she told me later that she began to think that maybe there was more to me than she had given me credit for having. The little conversation on stage had helped. Maybe it was my acting? Who knows? Anyway, she agreed see the movie. We saw each other for a brief time before I left for the Air Force. I liked her and her family. He dad was our preacher and she had a cute little younger sister. I don’t think her mom trusted me because when Kaye and I arrived back at her house the porch lights were flickering almost before we could reach the porch swing. Oh, well. The ‘best plans of men….’