Those persons who are still living and attended the old Louisa High School will remember the Cheek family. They were pretty much in charge of education during our academic career. William A. (Bill) Cheek was Superintendent of all County schools and for some of those years his brother, James I. (Jim) Cheek was Principal of LHS. During their respective tenures several new schools were built including the replacement of the burned out Blaine High School and the replacement of the old Kentucky Normal College that was a major part of my life as well as that of my family. Several of us kids worked on selling the idea of building a new grade school. That happened prior to my graduation, and I recall playing a concert on the new stage. That school actually had air conditioning, a thing we never dreamed of during those days. 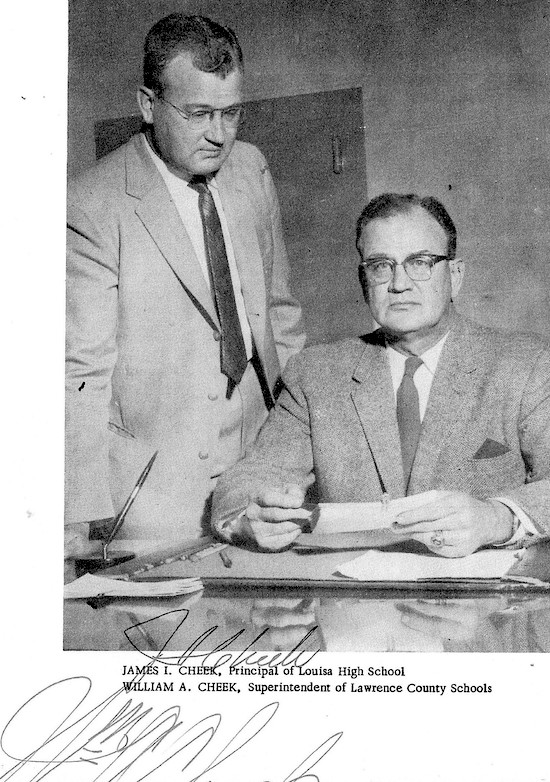 I believe both brothers cared a great deal about the fate of their students. They worked hard to give us that which we needed to become contributing adults and wise leaders. Above all think William A. Cheek wanted to be remembered as a teacher and a responsible Christian man. To me, he was clearly both. I know I benefited from being under his tutelage in an organization that ran smoothly for all my years in the school system. Many of us have good reason to be grateful he was there, and I’m sure there are many stories that could be told by nearly every student from those days.

Of course there were also a number of dedicated teachers that taught in that old brick building during the many years it stood. A few weeks back I wrote a little about Bascom Boyd and Louise Kingsmore, but there were many others that also an important role in our lives. While school rooms switched for some from year to year. A favorite of mine was Frank Webster. He had been principal for a time at the old grade school, but was later transferred to teach upperclassmen at LHS. He was a veteran of WWII and had earned a Master’s degree. He taught classes much the same manner as college professors and gave assignments that required research and diligent study. I nearly failed one of his classes at first, but overcame my difficulties with his help. I ended up with an ‘A.’ Boy was I proud! I learned so much doing research and study that has helped me later in life.

Mrs. Katherine White was a friend of our family and like several of my teachers, she was particularly interested in history relating to eighteenth century Colonial America. I think of her often because I live near Williamsburg, Virginia where I get to see a lot of those white powdered wigs, reenactments showing the roles of various patriots, musical concerts using period instruments, and the famous Williamsburg Drum Corps in parade. I think several of our teachers loved this kind of thing and thus, we too, grew to be patriots. That was our heritage and our responsibility.

Mr. Kenneth Hayes was another who loved the Colonial era. He taught about our nation’s forefathers, including Thomas Jefferson, George Washington, Samuel Adams, James Madison, Patrick Henry, Ben Franklin, and all the others. I remember when I was maybe a junior Mr. Hayes and Mrs. Hayes adopted some beautiful twin girls. When they brought them to church the whole congregation celebrated with them. They became his life, I suspect.

I remember Mrs. Donna Cassady who taught typing and her husband also taught some classes. I think he was a coach, as well, but I’m not certain. I do remember Coach Ivan Curnutte but I never had a class under him.

Mrs. Ruth Jackson was another favorite as was Mrs. E. Elisabeth Rice. Her son was a friend of mine who was very skilled in math and science. I remember our two hard heads met once at Cabwaylingo playing touch football. I was knocked out cold and woke up in my bed in the barracks. I think that proved his head was better than mine, at least as far as crunching is concerned.

Mr. J. Walter Thompson had his classroom on the third floor of the old building at the top of the stairs. One door in that room opened to a balcony in the second-floor auditorium, but it remained locked. I do recall going out there one time, but it was not encouraged. Mr. Thompson taught general business that I recall. It’s there when we were introduced to accounting, check writing, the value of incorporating our businesses, and the role of interest on investments. I learned some of that, but was destined to have to learn it again in college and when working on different jobs and situations I experienced later in life.

Mrs. Anna Thompson taught English. I didn’t have her in class and didn’t know her well. Their daughter, Jesse was a couple of years younger than me but I saw her in band and at church. Mr. Thompson told a story about how he had to leave his farm at Fallsburg at an early hour on his horse-drawn buckboard wagon on Saturdays to pick up supplies. He would not get back home until after dark on those old unpaved roads. When I think about that and how transportation has changed has made me wonder. For me, hearing about how people lived in another time is a wonderful delight that stirs the imagination and helps me better understand how and why we function in certain ways today.

There was Mrs. Laura Elswick Skeens that taught physics which was in essence a math class that was well over my head. I appreciate those technical skills, but am truly a ‘liberal arts’ guy. Mr. R.C. Wells was a favorite and taught shop and agriculture. Upon retirement Mr. Wells purchased a hardware store downtown and worked there for a number of years. He was a favorite in his generation and many that followed.

He was also sponsor, I think, of the Future Farmers of America (FFA). I remember the boys wearing the blue corduroy jackets with the large cord logo on the back. I don’t know if any of the town boys attended or were members, but it was the answer to the girl’s organization of Future Homemakers of America (FHA) that taught domestic skills that was considered so important in those days, including sewing, canning, cooking and baking, etc. Today, it may be considered ‘sexist’ in some circles to think of these things as ‘girl’s roles,’ but families benefitted when those skills were available. I loved to cook, as do all my sons, but I leave the sewing to Suzie. I remember that the FHA also sponsored an annual dance where the girls would ask the boys. I went to one of those with the sweetest girls and had a great time until my shyness ruined the evening. It has been one of my life’s regrets.

While these particular teachers came to my mind this week, I know there are others that the reader may recall. In addition, there were many others and a good-sized support staff, too, with which you may have personal memories or connections, such as Mrs. Cheek who ran the book store, a favorite stop for a snack or two. There were building and grounds workers, janitors, bus drivers, and even a truant officer (Bill Elkins Sr.) that played their role. Each, in their own way, contributed to our ‘education.’ In life, learning is more than just a single academic course. It’s about having the tools you need to live and be successful as adults. I know that these people mentioned all had a great interest in seeing that we were exposed to what we needed. Whether that was the classics in music or literature, mathematical theorems, or simply how to think of others before acting. The lucky generations that were under their tutelage had experiences that were and will remain an eternal blessing. Because of them the world was a better place.