The two rivals who combine to start nine sophomores and freshman came out tight in a very intense atmosphere. Both teams struggled throughout the quarter as Tolsia led 8-5 after one.

took advantage by out scoring the Lady Rebels 16-7 and led 21-15 at halftime.

After the break Tolsia guard Lynndsey Cassell scored 8 straight points on two three pointers and a layup before a Tug Valley timeout for a 23-21 Lady Rebel lead. After the timeout Tolsia continued the momentum throughout the period and ended up with a 37-30 lead as Katelyn Kelly nailed a three pointer at the buzzer.

As the fourth began Tug Valley fought back with back to back three pointers to tie the game at 39. After that the two teams went back and forth until under a minute with the Lady Panthers clinging to a three point lead when Selena Browning stepped up from the wing and drilled a three pointer to tie the score at 49 all. Tolsia forced a turnover and got one more shot in overtime but a Kenzie Young three pointer wouldn’t fall as time expired sending the game into overtime.

In the OT period Tug Valley scored 12 points with 8 of those coming from the foul line and out scored the Lady Rebels 12-9 for the victory.

Tolsia was in foul trouble from the get go and ended with four players fouling out and two more with four fouls.

Tolsia was led by Lynndsey Cassell with 16 points including 3 three pointers and 5 steals, Selena Browning tallied 11 points all in the fourth quarter and overtime, Julie Boone 10 points and a career high 20 rebounds, Sarah Jude ended her illustrious career with 9 points and 7 rebounds, Kylea Pollinger 7 points and 5 assists, Katelyn Kelly finished with 3 points, Jace Litton chipped in with 2 points.

Tug Valley will play Huntington St. Joe the #22 team in the nation Friday at the Williamson Field House for the Region 4 Section 2 Title. Both teams will advance to the Regional tournament.

“… I want to give Coach Farley and Tug Valley all the credit he really cares about his kids and we want to wish them luck the rest of the way.”

“… We had a shot to win it in regulation and I give Kenzie Young kudos for stepping up and taking the shot to win it. We survived the first half foul trouble and got our starters back and took the lead in the third quarter and battled to the end.”

“… Really proud of our kids for playing their hearts out tonight and all season long. We won 15 games for the first time since 2013. We are a young group with 8 sophomores and 3 freshman.”

“… Sarah Jude is Irreplaceable I’ve never coached a girl like her. I’m not trying to make anyone mad. I have coached a bunch of great players but she can play all five positions and if she isn’t first team all state something is wrong”

GROWING UP IN LOUISA: Introduction to music 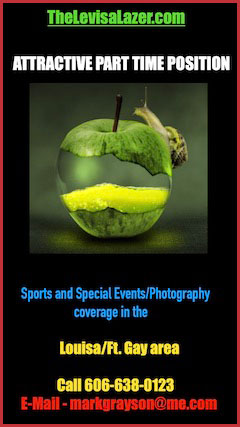