GROWING UP IN LOUISA: Introduction to music

Before discussing the teachers and classes remaining on the first floor of that old building I cannot help but have thoughts of the top floor at the rear. While there were two sets of stairs leading into the heights of the edifice I am tempted to dispose of a subject that was dear to so many during our high school career. Whether you were a band member or not you were exposed to and have at least some memories of that organization. I will cover my introduction this week and then will talk later of special things like trips, camps, band jackets, state competitions, and hours of practicing. 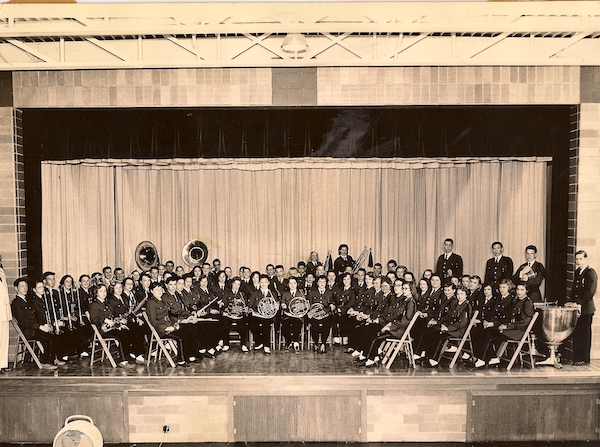 When I first started with the LHS band in the seventh grade, Richard ‘Dick’ Wilson was the director. I remember when he stopped by my house a couple of times trying to interest me in joining up and learning to play an instrument. One major problem was that I couldn’t afford an instrument. Mom and I had also learned a lesson about the cost of such things years earlier when I was in the fourth grade. I was given a rental trumpet to play in the fledging Louisa Grade School band, but the loaner horn fell victim to one of my cousins who damaged it by banging in the mouthpiece. My poor mom had to find money to reimburse the school for the repairs. I wasn’t welcome in the little band after that. It was the basis for fear that something else like that might occur.

So when Mr. Wilson showed up with the promise of a ‘free’ loaner horn I was reluctant. In spite of the history with the elementary trumpet my mother encouraged me to go ahead and join up. She had played trumpet during her high school years. I’ve seen old grainy movies that show her marching with the band. How could I ignore a family tradition? I weakened and agreed to try again. Besides, I really wanted to learn how to play music. A few years ago Billy Elkins sent me that copy of the old film that enabled me to see my mom in parade. I’ve also seen photos in old year books where she stands out in band pictures.

A short time later, Mr. Wilson came by the house and dropped off a loan of some LP records. The recordings were of some classical music that he felt I would want to hear. Well, the name of the composition was foreign to me, but I kept my mouth shut and pretended to show excitement about the music. After all, it was the polite posture since he had gone to all this trouble.

The joke, if there was one, was on me. I took the records to my room, put them on my new Hi-Fi and began to listen to them. The set of records was a complete recording of Handel’s Messiah. Wise as Mr. Wilson was, he had also left a score of the music so I could follow the notes and hear all the intricate movements. I loved every page and every record. There were a number of records in the set. They were full of choruses and solos by clearly accomplished people. The music itself was wonderful. The words were straight out of the Bible and surprisingly known to me. I had heard the words in church in the telling of the story of Christ. 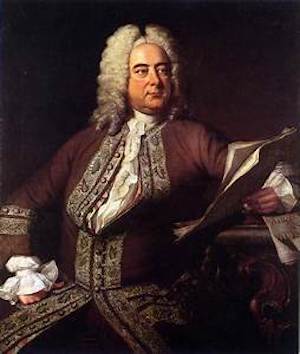 A small historical introduction told me of how George Frederick Handel had locked himself in his room, taking little refreshments, or sleep, to write this oratorio in 24 days. The story went on to say that Handel felt as if he was guided by the very hand of God. The majestic work was subsequently arranged for full orchestra and choir. I listened so much over the next several days that I actually learned the parts and knew much of the music by heart. Today it is the most recognizable music of its type. Even non-Christians know the Hallelujah Chorus. The history goes that when it was played before the King, he rose during that chorus so everyone in the audience rose as well in celebration. It is now tradition that during this chorus we all continue to rise.

A couple of months later I reluctantly returned the records by taking them by Mr. Wilson’s house over in Little Italy. He invited me in and showed me his large box grand piano. I had seen grand pianos before but the antique box grand shape was new to me. It was very ornate and beautifully carved, a master piece of furniture, but more than just a beautiful instrument. I think it was his mother that served something, perhaps tea, while I told Mr. Wilson of my love for the music he loaned me.

I had begun a lifelong journey in learning about classical music that is still an important element in my life. Yes, I appreciate bluegrass, mountain music, and pops, and was an avid listener to the ‘Hit Parade,’ but because of this introduction I grew to recognize the major composers and how music progressed from Baroque to modern works. I came to understand Bach, Beethoven, Mozart, Chopin, Gershwin, Baccarat, Bernstein, and finally even the Beatles. I was now able to watch a movie and understand how important the background music was to the production. If you doubt that, try watching Jaws, Jurassic Park, or Psych with the sound off. Then listen to the background music but don’t watch the screen. Your eyes will be opened immediately that it is often the music that sets the mood and tells the story.

I suppose it wasn’t more than a year or so later that I heard that Mr. Wilson was moving to take a band director’s job in Pulaski, Virginia. I was very disturbed that my ‘coach,’ and mentor, was to leave my life. It didn’t seem fair. After all, I was new in this musical journey and needed his expert guidance and advice. When I spoke to him about his leaving he showed me some pictures of the town in Virginia that he had grown to love. He, like me, loved to oil paint, too, so he shared the pictures of foggy mornings in the meadows he had painted just as they had occurred. He was in love with a new opportunity to teach music in those beautiful surroundings. I could only wish him well in his new endeavors, wondering how this would affect my life.

When I heard that Smith “Pete” Armstrong was to be the new band director, I relaxed. I had known him and heard him sing at our church over the years. He was the son of my first grade teacher who was also organist at our church, so it was befitting that he would come home and take the now vacant position. Within the first year I came to enjoy his professional approach as a bandmaster so I settled into the evolutionary growth that would come my way over the next years. He would also take over the directorship of the church choir, so I came to know him very well. When Pete came home he also brought his pretty young wife, Naomi, who would become the Glee Club director at LHS. I sang with that group, with the church choir, and continued to play in the LHS band.

Mr. Armstrong had returned to town after a tour with the US Air Force Band in Washington. He was also a member of the Air Force Singing Sergeants, a well-known national group that performed at the White House and at other important functions. He would pass on to me some training materials given him in the Air Force that would enable me to later play with an Air Force band. I also later directed a chapel choir while I was in the Air Force. 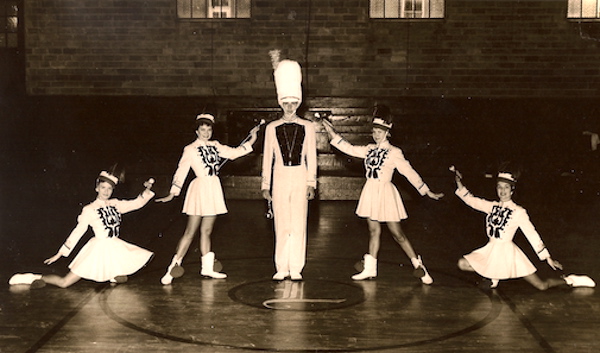 Just prior to my senior high school year Mr. Armstrong called me at home to ask me to meet him at the school. He was there planning the agenda for the upcoming band camp to be held at Cabwaylingo. To my surprise he presented me with the suggestion that he wanted me to be Drum Major for the upcoming year. In spite of the honor of being recognized as a possible leader, I was shocked and really not as pleased as you might think. Like many of my male friends, I felt the position a little ‘sissified’ and that it might make me the subject of ridicule, bullying or teasing. Mr. Armstrong went on to insist that I was an excellent marcher, was a good leader, and by being tall and slender I would stand out. Standing out is not the same as outstanding, and that was precisely what was worrying me. As a teen, standing out wasn’t on my list, if you please.

I wanted to be polite and was certainly honored, but I said I wasn’t much in favor of taking the position. He told me to think about it. I did. I talked to my family and to several of my friends. To my surprise they encouraged me, but they were also quick to add that the decision would have to be mine. Growing up isn’t fun, I discovered. Mr. Armstrong continued to call, coming by one afternoon with the big stick with the shiny globe on the end (a baton).  He showed me how to give signals for the band to start up the music, to march, and to stop the music whenever it seemed right. He also gave me a big fancy whistle. It was clear that he figured the decision was a given. I felt turning it down at this point was at least, ill-advised. 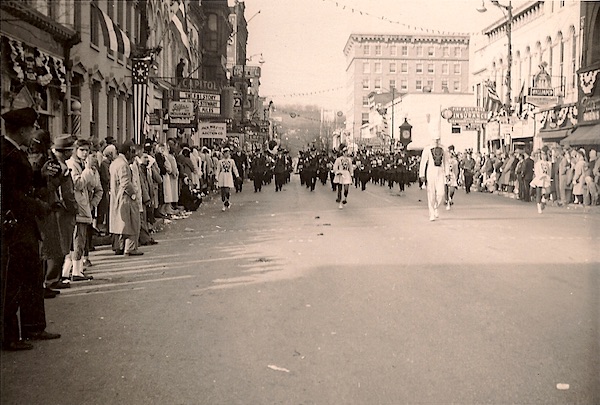 Many parades later I found out that I could survive and that taking the helm was fun. It wasn’t without challenges, but with the support of Mr. Armstrong and others, I had a successful year. We marched in Morehead, and on a very cold morning in Frankfort, and at the ribbon–cutting ceremonies for the new ‘river road,’ with Governor Happy Chandler. We had parades in town and at many football games. It was a good year. At the end of my senior year I turned in the uniform with a little sadness that this part of my life was over.

Mr. Armstrong remained at school for a time, but I heard that he took up a new career path by studying dentistry and then following up as a professor of dentistry. I was sorry to hear when he passed away, but I was pleased to have known him and to have earned his trust. I know that he played an important role for a number of us. During his years at LHS the size of the band grew and we added a number of new instruments, each having a different ‘voice’ when in concert. The cultural lives of the student body expanded. We took state honors at concert, and even cut a record, as I recall.

6 ABORTION BILLS HAVE BEEN FILED BY KENTUCKY LAWMAKERS: WHAT TO KNOW