The Kentucky State Police have introduced a new mobile substance abuse education exhibit designed to help inform the public about the devastating effects of substance abuse.

The 30-foot trailer features 14 flat screen monitors and one touch-screen monitor that present video messages about meth, heroin, marijuana, alcohol and tobacco. The videos include actual meth users who tell their real-life stories illustrated by before-and-after images that show the dramatic visual progression of their drug abuse.

The exhibit also makes use of two showcase displays to highlight examples of a variety of drug paraphernalia and meth-related items. 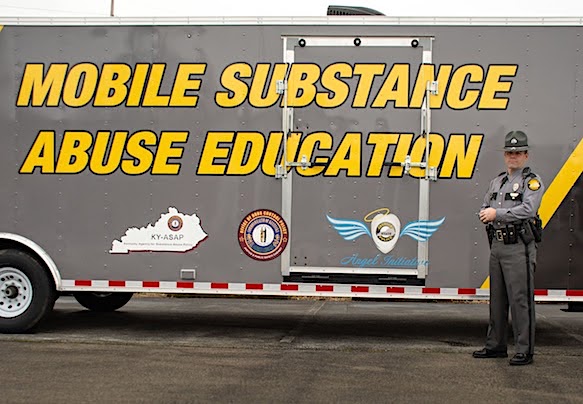 “Education is a crucial aspect of mitigating the drug problem,” said Lt. Col. Jeremy Slinker, director of the KSP Operations Division. “This exhibit is an excellent vehicle for initiating conversations about drugs among young people and adults.”

“The images in the exhibit are not pretty because there is nothing pretty about drug abuse,” he added. “However, drug abuse is present here in Kentucky and cannot be ignored.”

The exhibit was funded by a $92,000 grant from the Kentucky Office of Drug Control Policy and was designed and built by DCX Displays in Louisville.

“This innovative exhibit is designed to raise awareness on many levels – addiction, detection, recognition, treatment and, we hope, prevention,” said Sgt. Josh Lawson, commander of the KSP Public Affairs Branch.

“Sometimes, adults are uncomfortable talking to children about drugs and other harmful behaviors,” he noted. “This display acts as a useful educational resource to start this vital two-way communication process between young people and adults.”

The mobile exhibit is now available for use by schools, clubs, civic organizations, businesses, churches, local governments and communities throughout the state. To schedule the display, contact the Public Affairs Officer at the KSP post closest to your location or call the KSP Public Affairs Branch at (502) 782-1780.