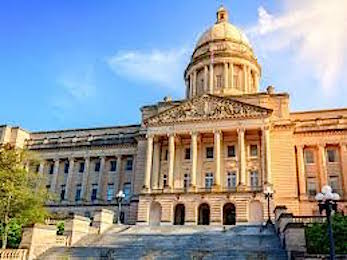 FRANKFORT — As usual, the excitement of the opening day of a Kentucky General Assembly session was evident on Tuesday amid the packed crowds, broad smiles, and welcoming handshakes throughout the State Capitol.

But the spirit of the day might have been most clearly revealed in the trembling voices of some new lawmakers the first time they offered public comments in legislative chambers. The mix of nerves, emotion, and deep gratitude they expressed while welcoming family and friends to their swearing-in day showed how humbling it is to be entrusted with a chance to help write a new chapter in Kentucky history.

Besides swearing in new members, the first week of the session gave lawmakers a chance to handle organizational matters such as adopting rules of procedure, organizing committees, and electing legislative leaders.

A top leadership change took place in the House, where Speaker David Osborne, R-Prospect, was elected to his first term in the chamber’s top job. Though officially new to the position, the role is a familiar one to Osborne since he presided over the House chamber while serving as Speaker Pro Tempore last year while the Speaker’s position was vacant.

In the Senate, President Robert Stivers, R-Manchester, was reelected as President and Sen. David Givens, R-Greensburg, was selected as the chamber’s President Pro Tempore.

Besides handling leader elections and other organizational matters, lawmakers have also started introducing bills. More than 200 of them have been filed so far to begin their journeys through the process.

One piece of legislation off to a quick start, Senate Bill 5, has already become the first bill this year to gain approval from a chamber. The legislation, which was passed on Thursday on a 31-4 vote in the Senate, proposes a constitutional amendment that would move the elections for Kentucky governor and lieutenant governor to even-numbered years every four years. The elections for state auditor, attorney general, secretary of state, and commissioner of agriculture would also move to the same schedule.

SB 5 now goes to the House for consideration. If approved there, Kentucky voters will vote on the matter, as is the case for all proposed constitutional amendments.

In addition to elections, other topics that might receive attention in this year’s session include school safety, sports betting, public pension reform, bail reform, medical marijuana, charter school funding, and many other matters.

Lawmakers are now returning to their home districts. As outlined by the constitution, the Senate and House adjourn after completing the first part of the session and enter a recess period until lawmakers return to the State Capitol on the first Tuesday in February for the rest of this year’s 30-day session.

There are many ways to keep in touch with the legislative process. All the bills lawmakers are voting on can be reviewed in the online Legislative Record at http://www.lrc.ky.gov/record/19RS/record.html.

You can share your views on the issues with lawmakers by calling the General Assembly’s toll-free message line at 1-800-372-7181.

GROWING UP IN LOUISA: Profiling