LOUISA, KY. — The playbook went out the door Wednesday morning as the newly elected Lawrence Fiscal Court went ‘out with the old and in with the new’ changing positions, eliminating positions and changing some workers. The court also voted to stamp out smoking everywhere in the courthouse once and for all. Illicit smoking has reportedly been going on in the upstairs courtroom and offices. 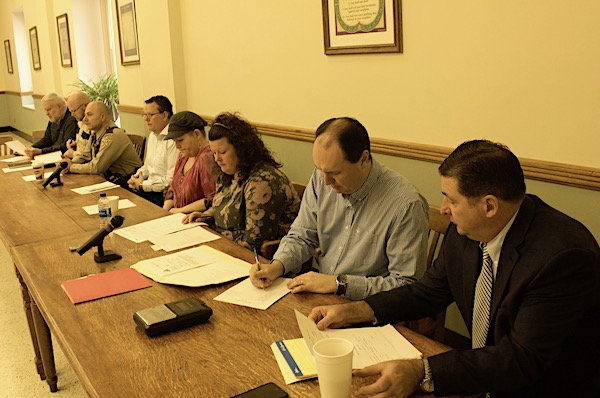 Wednesday’s meeting went over the 2019 agenda handling a lot of new changes including new personnel appointments and salaries for 2019.

Here’s a rundown of other details of the meeting:

The Motion was passed to have the Fiscal Court meeting times stay the same every 3rd Tuesday of the month at 10:00am in the Louisa Court House.

Next was the Approval of Elected Officials and all bonds were received.

The Motion to Approve to Give the Authority to Sign, Accept and to administer all grants was passed.

Recurring expense list and Judge to Purchase up to $19,999 was approved.

County Judge Executive, Phil Carter announced Daniel Castle and Paul Wells were appointed the Regional Jail Board. It is Lawrence County’s turn for the chairmanship and  Daniel Castle will be chairman”.

Next was the Approval of a Non-Smoking Courthouse. Rick Blackburn, Distract Four Magistrate made the motion and Michael Halcomb, Distract One Magistrate 2nd the second to pass. Vote unanimous.

KRS 67.725 was passed for a time when the Regular Judge Executive is absent or disable the line of succession would fall to the Deputy Judge Executive.

At that time the meeting was adjourned.