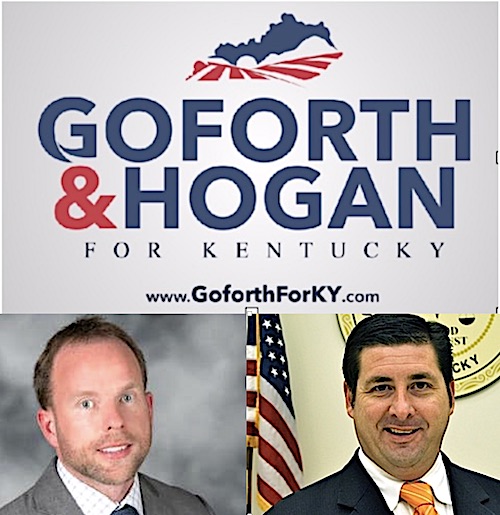 LONDON – Republican State Representative Robert Goforth of East Bernstadt announced his campaign for Governor in London, KY earlier this morning saying, “I am not a New England transplant using the people of Kentucky to feed my ego or audition for a job in Washington, D.C.  Rather, I empathize with millions of my fellow Kentuckians.  I understand and I respect you because I am you. I believe Kentucky deserves a governor who is one of us.’

Goforth introduced Mike Hogan as his running mate for Lt. Governor.  Hogan is in his fifth term as Lawrence County Attorney and was narrowly defeated in the 2015 GOP primary for Attorney General.  Goforth and Hogan are both military veterans, having served in the U.S. Army.

Drawing a sharp contrast with incumbent Governor Matt Bevin, Goforth said, “We need a governor who listens more than he lectures; who leads more than he lambasts.  Our Commonwealth needs a chief executive who is a conservative molded not by New England and Wall Street but by Kentucky and Main Street.”

Goforth reminded voters of Bevin’s numerous attacks on teachers and public employees last year, “Our people are tired of being talked down to and maligned by someone who thinks he is better than us, that he alone has all of the answers to the problems we face.  Kentuckians are fed up with leadership that is arrogant, condescending and ego driven.”

Goforth described himself as “a conservative of the heart” and vowed to bring people together to solve the challenges that confront our Commonwealth.”

Goforth closed his remarks saying, “To anyone who may say that I cannot possibly defeat an entrenched governor who is funded by corporate CEOs and wealthy elites, know this:  I have been fighting and defying the odds my entire life, accomplishing goals most never thought possible.  Mike and I are not afraid of the challenge that lies ahead.  We don’t just welcome it.  We embrace it.”

HERE IS A VIEW OF THE STORY FROM LOUISVILLE INSIDER WE WANTED TO SHARE WITH OUR VIEWERS:

The first Republican to make his candidacy for governor of Kentucky official will not be Gov. Matt Bevin but state Rep. Robert Goforth of East Bernstadt.

Goforth posted a message on Facebook Friday indicating that he will make an announcement about his political future at an event Tuesday morning in London, but the back end of his campaign website indicates that this announcement will be his run for governor this year with Michael Hogan, an attorney from Lawrence County who ran for attorney general in 2015.

The campaign website states that Goforth “is running for Kentucky’s Governor because he wants to give back to the state and the people that helped him be successful in life.”

Goforth is new to Kentucky politics, having first won an election to the state House in a special election last February and then winning the seat again in November by a margin of over 50 percentage points.

Noting that he is a veteran and pharmacist, Goforth’s website goes on to state that he “built his businesses from the ground up, building his pharmacies in Southeast Kentucky up from zero to multimillion dollars in annual revenues. Robert created over 30 jobs in his businesses for people in our region.”

Hogan, who also put up a Facebook post previewing an announcement about his political future on Tuesday, lost the close Republican primary for attorney general in 2015 to state Sen. Whitney Westerfield.

Goforth has prefiled 11 bills for the 2019 session of the Kentucky General Assembly, including a bill that would make performing an abortion after a heartbeat is detectable a Class D felony. He is also the co-sponsor of a bill to reverse a workers compensation bill passed by the legislature last year that he said created unfair hurdles for coal miners to attain black lung benefits.

Gov. Bevin announced last summer that he will run for a second term this year but has not filed any paperwork to make such a run official or raise funds for such a campaign. Political observers have speculated that he may opt against a run and instead take a job with the Trump administration, but he has another three weeks before the deadline for 2019 statewide candidates to file for office.

ELECTRICIAN CLASSES COMING UP AT BSCTS