Was I ever this kind of kid? I got a phone call from my honey telling me that I needed to rush home to rescue two of three grandkids we keep. Home happens to be an hour and a half drive from my office, but I had little choice but to jump in the wagon and head for home.

We have a ‘bonus room’ over our garage that is only accessible from our first-floor. We had decided it would be Suzy’s sewing room. It has a number of boxes of fabric and some machines, but we have not yet fully set it up. Just outside that room a small area on a landing that has been given to the grandchildren as one of the two places they can spread out Lego’s, Lincoln Logs, and other toys. As it happed two of them, ages 3 & 4, had gone into the sewing room, closed the door and set to dismantle the door knobs. How they did that without a screwdriver and some training is totally unknown to me. The result was that they were locked in that room so that Suzy couldn’t get in and they couldn’t get out.

They used the time it took me to get there to draw on all the walls, pee on the floor, and throw fabric bolts into piles. That’s kids, I guess. I was able to show Suzy how to solve the problem with the closed door and then set about trying to find all the parts, so I could reassemble and examine the door knob set. Suzy helped them understand what they had done wrong. After a nap they were our sweet little dumplings again. Grrrrr! 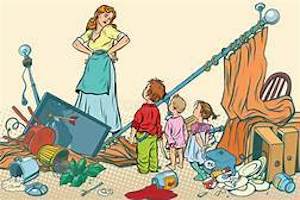 I tried to remember growing up and committing those kinds of destructive things I must have done back in the day. Surprisingly, I can see now that I was nearly perfect, never doing anything that would damage my home, toys, or those family heirlooms that survived; or did they? Thinking a little harder was the key to affirm that I had this evil nature early on, and maybe still have it. The difference being that I am sneakier or act out of pure ignorance.

I remember we once had this beautiful roll-top desk that had belonged to my great grandfather. My cousin and I had discovered its secret hiding-places but found that the roll-top was sometimes a bit sticky. Our solution was to simply remove and discard the top. It was a week or so before anyone discovered our improvements and far too late to put any remaining pieces back together. Somehow, that seems different. I’m not of the nature to do anything destructive…or could I?

I discovered once that if you can get a corner of the wallpaper to pull away that you might actually be able to remove fifty to sixty percent. The rest can be scraped off by parents. We saved them a lot of work! It turned out that they were not impressed. In fact, they looked as if they were depressed. They just see the value in the help I had provided.

The older folks didn’t mind the basketball court we put in the side yard until neighbors started complaining about the noise. One of them even reminded us by shouting out a window that it was eleven o’clock. I never understood why we needed to know the time of day. Nonetheless, it was nice that he pointed out the time since I did need some beauty-rest.

I’ve told the stories about Johnny Bill Boggs and me floating down the Big Sandy to fish at the mouth of Bear Creek. (It might have been Blaine Creek?). Anyway, it was well after dark by the time we got back to the dam. If Johnny Bill’s father and a crowd of others hadn’t been on the river bank shining lights, we might not have seen the big dam pilings and could have crashed and sunk the boat. It was nice of these grownups to collectively assemble to greet us as we pulled up to Pete Armstrong’s dock. We didn’t know we were that popular.

For those who insist that human nature is kind and lovable, they should really look at a baby who is hungry, wet, or wants HIS toy. My grandchildren find the idea of sharing repulsive and absolutely foolish. Not only do they protect toys they perceive to be theirs, but even their drinkie cups and lap blankets once used means it is now always THEIRS. The same goes for which chair, and who gets a bath first. They are far better at making rules than their poor old grandfather. Was I like that?

I know that as soon as I turn my back if there’s anything that is or should be taboo, the kids head straight that direction. Our four-year old granddaughter brought Suzy a TV remote saying that her brother, Jacob, a three-year old, had gotten it wet. When Suzy went into the bathroom which was the scene of the crime she saw the commode was ram-filled with four onions from the kitchen. A dish towel had been crammed into the toilet as well. Somewhere along this project the remote had gotten wet. Go figure.

A few weeks ago when we had some company in the house one of the visiting adults came out of the half-bath and told Suzy that somehow a matchbook automobile had been put in the toilet. Suzy retrieved it, but a day or so later noticed the commode didn’t flush properly. Being a super-husband and all around ‘jack of all trades,’ I removed the china device to find that other toy cars had been only slightly more effective than the first. They were jammed with wads of tissue that stopped the required flow of waste water.

Suzy had made a pound cake for me to take to the office for a birthday celebration for one of the ladies. At some point during the mixing process Suzy was apparently distracted, perhaps by one of the sweet children. When she returned to her project she found that two eggs were missing. Upon some exploration she found the eggs had been broken and dropped on the dining room rug.  I have to wonder if they are very intelligent and highly inquisitive, or if they are just full of devilish pranks.

During my early school years, or perhaps before, I learned that sticking something in an electrical outlet isn’t smart. I can still feel the vibration in my arm as if I’d hit my funny bone, only it wasn’t funny. I have dropped glasses and plates, spilled water, dirtied my pants, scuffed my good shoes, torn my shirt, and stolen small amounts of money left unattended. I’ve eaten a whole cake meant for the family under a wrong assumption it had been baked for me. I had no thoughts of sharing. When I realized my error I was deeply shaken and ashamed.

Did I ever turn on the water and leave it going? Naw! I’m smarter than that regardless of what my aunt said. I know I always did my own homework and was always attentive to grownups when I was given instruction. It’s just that the teachers wrote tests on the wrong things. They tricked me into studying one thing and then tested me on another. Anyway, I don’t need to know the multiplication table. It’s right there in the book if I need it for goodness sake. 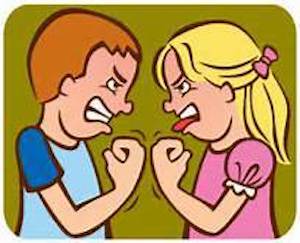 In my neighborhood I would hear a kid scream out, “He started it!” I’ve heard the long, drawn-out investigations meant to prove the other kid was at fault. There came a point that this became tiresome to the point that no one cared and just wanted to go back to play. The goal of the scream was to get even, but once everyone is involved and overheated, it just isn’t worth waiting for the judge’s final decision.

Clearly, It is the nature of kids to fight, scrap, throw temper-tantrums, bully, violently break toys, throw blocks or other things at siblings or neighbors, and to refuse to share anything. It is all too normal to sneak cookies out of the cookie jar. Once, when caught red-handed in the cookie jar one of my sons just looked at me and said, “Sometimes you just have to forgive.” I did but remembered that I needed a safer place for storing cookies.

I guess the difference between a kid and a politician is that the kid grows up. Do you remember (and admit) any foolish or inquisitive things you did as a kid? Those stories usually show up when they now adult family meets for family dinners with a ‘Do you remember…?’

REBELS REMAIN UNDEFEATED IN SECTION PLAY WITH WIN OVER BUFFALO