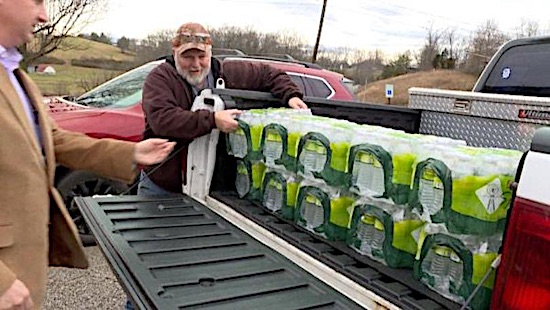 DRINKING WATER BOTTLES GATHERED BY A TEACHER GROUP IN BOYD COUNTY KY, ONE OF MANY ORGANIZED ACROSS THE STATE TO AID MARTIN COUNTY SCHOOL SYSTEM . (PHOTO WSAZ-TV.)

Teachers from around Kentucky are collecting drinking water in hopes of helping students in Martin County during the ongoing water crisis in the county.

The Facebook group “Kentucky Teachers in the Know”, organized the water drive collection. 20 separate drinkable water collections are currently happening across the state of Kentucky involving the teacher group.

On Friday, they had a water drive in Boyd County. The group brought in a truck-load of water that they plan to deliver to Martin County Schools for them to decide how to distribute the water.

“We will reach across the state to help students,” said organizer Allison Slone. “Whether they are in our county or another county we are here to help and Frankfort needs to do the same.”

Amid the special session of the Kentucky legislature in mid-December, the failed attempt to find a new pension plan for the state cost taxpayers nearly $130,000. That is money that Ms. Slone says could have been used to help find a solution to the water crisis.

“I hope this at least gets the conversation going,” said Slone. “If there is a problem, it needs to be fixed – just like our pension. The issues in Martin County need to be fixed immediately. This isn’t a long-term fix. This needs to be an immediate fix.”

The drive comes days after country music singer and Eastern Kentucky Native Tyler Childers held a water drive and concert for the county that brought in 12,000 bottles of drinking water, along with a major development on Thursday from the office of Kentucky Attorney General Andy Beshear.

Beshear, who is also running for governor, is calling for an appointment of an independent supervisor to oversee nearly $8 million in state and federal funded projects to improve Martin County’s water system.

The attorney general says he wants the supervisor to make sure the money is not mishandled by the Martin County water district.