LOUISA, Ky. — Lawrence Co. Senior Noah West will continue his academic and athletic career in the Volunteer state after signing scholarship papers to Division 1 East Tennessee St. University in Johnson City on Tuesday in the LCHS Library in front of a host of family, friends and fellow Bulldog football players.

West had a well documented career that began on the defensive line as a freshman and ended up as a record setting quarterback for the Dawgs.

On behalf of the Lawrence County Football Program, Lawrence County High School, and the Family and friends of Noah West, I welcome you to LCHS today to celebrate a monumental milestone for one of our student/athletes. Today, we are here to celebrate and recognize an outstanding achievement and opportunity for Noah West and his family, as he will be making his commitment to the University of his choice.

Noah West will sign his National Letter of Intent. Noah will be the first Lawrence County Bulldog since Tyler Combs in 2012 to sign to play football at the Division 1 level. 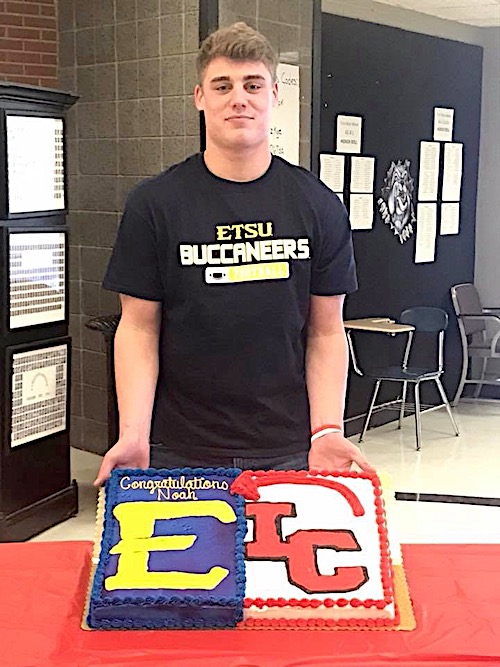 Noah West engineered the Lawrence County Offense  as the Quarterback in a Flex bone Triple Option Offense. Like in any offense, the Quarterback is the trigger man, reading defenders, and making decisions as to where the ball goes on any given play. In 15 years of Coaching High School Football, running this offense, we have never had a quarterback with the following totals and awards:

2018 Lead Class 3A in Rushing as an individual and as a team.

Over the course of Noah’s career as a Bulldog, Noah gained an astonishing 4,474 yards rushing, on 643 rushing attempts, averaging 7 yards per carry, scoring 66 career touchdowns while scoring 448 career points.

Noah and our team have had many memorable performances from his time at Lawrence County but none can top Western Hills in 2018 where he rushed 44 times, for 396 yards and 7 touchdowns, while also scoring 9 two point conversions for  60 total points in a 78-74 Lawrence County Playoff Victory. The 60 point total is good for 4th All-Time in Kentucky High School Football History for points in a game!

Aside from all the accomplishments on the football field, Noah also excels in the classroom as he currently carries a 3.8 GPA.

“… What makes Noah special is the type of person he his. Noah is a prime example of the core values of our football program and did an outstanding job portraying them.”

-We tell each other the truth

-On time is late

-We are all recruiters

-Extra Effort is the norm

-In class, we are on time, we sit upfront, and we engage our teachers

“… Humble is a word that I would use to describe Noah. In his time playing for Lawrence County, he never made the game about himself. He understood that football is a team game and without his teammates none of this would have been possible. After a big play or touchdown, Noah didn’t beat his chest or throw his arms up telling everyone to look at him, he simply went and celebrated with his teammates.”

After arguably the best game of his high school career against Western Hills Noah had this to say to the Daily-Independent’s Zack Klemme:

“I’m really thankful that God put me in this opportunity to play this game, and to give the credit to Him for the athletic ability and the team that he’s put me on, that I can prosper and glorify him through my athletics. It’s an honor to be part of this team and part of this game, because I think this one’s gonna be remembered for a while.”

To all the younger players out there in the audience. Let this day be a reminder of what you are able to accomplish when you dream big, work hard, have a great attitude, and stay committed.

Today, Noah will sign to play football with East Tennessee State University in Johnson City, Tennessee. The National Letter of Intent is a binding contract that signifies that Noah will be placed on a full athletic scholarship. This scholarship will cover the full cost of attendance, meals, and housing. In short, this is a big deal, not only to Noah, but also his family.