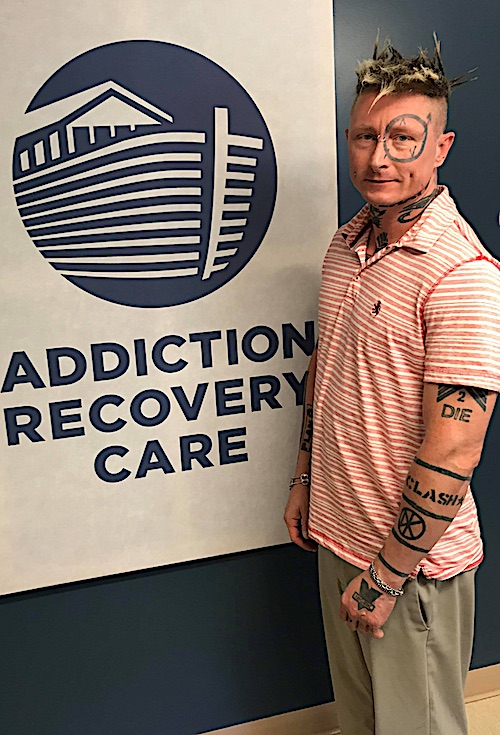 This series is a collaboration between the Leviza Lazer and Addiction Recovery Care to report on men and women’s struggles as they went from active-addiction to abundant-recovery.  With half of its 400+ employees in recovery from substance use disorder, Addiction Recovery Care (ARC), Inc. is leading the way in Appalachia when it comes to combining drug treatment and vocational training that results in second chance employment. Roughly one-third of ARC’s approximately 450 employees are graduates of an ARC treatment program. ARC believes that the solution to the nation’s workforce issues is lying dormant in the lives of those who are struggling with addiction or alcoholism.

At Addiction Recovery Care, it’s hard to know when treatment for years of addiction will start to turn a patient’s life around. There’s a saying that the goal of early care is to keep patients around “long enough for the miracle to happen.”  They happen daily, but not always quickly. For Joe Waugh, the miracle was slow in coming.

The native of Mansfield, Ohio spent nearly 29 years in active-addiction, becoming addicted by age 15.  Over time, he became an IV drug user and his drug of choice was heroin. If he couldn’t get that, he’ll tell you, he settled for “anything else I could put in a spoon”. Joe says, “I turned into the very thing I hated, a dirty needle junkie.”  During that period of his life, Joe had more than one chance to get clean, but it just didn’t happen.

Joe recalls it all with a fair bit of stoicism. He doesn’t pull his punches: “In the Alcoholics Anonymous “Big Book”, it talks about how addiction leads to jails, institutions and death. It was right; it landed me in prison multiple times as well as mental institutions and several overdoses including a near fatal overdose in 2007 that resulted in 5 days on life support.”

It doubtless seemed to many that Joe was too far gone for help. Still, there was something that kept him hanging around, waiting on that miracle.  “When I was released from prison February 1, 2017, I signed an interstate contract to transfer my parole to Seattle Washington. My transfer was denied. I tried everything to get out of Louisa, but something wanted me to stay right here. I wanted to get away from Louisa as soon as possible.”  Unbeknownst to Joe, the miracle was on its way.

Looking back, it all makes sense. There were bigger plans and a bigger purpose at work. “God showed up and ruined all my plans. You see I wasn’t tall enough to see the big picture. I had no idea the changes in my life that were to come.”

Most importantly, perhaps, Joe found acceptance and a new way of life among people who were first his treatment friends and later, his colleagues, a wonderful contrast to his precious life: “While in addiction I felt like an animal or subhuman. The only thing I could feel was pain and a feeling of helplessness. I had no idea how to be sober. I wanted to die, but instead I existed in a state of misery and shame for years.”

Today, Joe is employed by ARC and works in the company’s Education and Career Services division. He goes to work every day and loves his job. Before ARC, he no idea he had the potential to be a great employee: “I had no idea that I had good work ethics. The longest I had ever been employed was the three years I worked in the kitchen while in the penitentiary.”

Joe now has pride and a sense of purpose. “In prison you are expected to wear your ID badge and state number, reminding you daily you’re a criminal reduced to a number.  I now wear my employee ID around my neck even though it is not mandatory. It reminds me who I am now, and from Monday – Friday I wear it as a reminder.  I am now a full-time employee, a taxpayer, a graduate of the PSSA and a certified peer support specialist for the state of Kentucky. I have a purpose and a new identity.”

There’s a misunderstanding in society that addicts don’t want to stop because using is fun. But the simple truth is that they just can’t. The drugs have taken over and rewired their bodies to crave more, regardless of most hurt it causes. “Addiction can be summed up in one word…loss,” Joe says.

There is good news, though. Recovery can be found for anyone with the right circumstances and enough patience and perseverance.  Joe believes recovery can also be summed up in a single word: “restoration.”

“I lost everything, but I got a second chance to restore everything I ever lost.. I am a dad, a son, a brother, an employee and a graduate.”

ARC is a substance use disorder treatment company based in Louisa. It has outpatient and in-patient facilities around Kentucky. It gives select clients with 60 days of residential treatment the option to become an intern, and to simultaneously continue with their treatment and learn the ins and outs of operating a treatment program.  ARC is combining occupational rebuilding with treatment for addiction to create a continuum for rebuilding lives.

ARC believes supporting a client’s discovery of a sense of purpose combined with employment is a critical factor in long-term recovery, and it prides itself on helping clients first achieve sobriety and then helping them discover their God-given destiny.