RECENT SPATE OF ANIMALS BEING LEFT AND ABANDONED AT THE SHELTER DURING AFTER HOURS DURING, WORSENS AS WEATHER TURNED MUCH COLDER AND WETTER UNEXPECTEDLY THIS SEASON 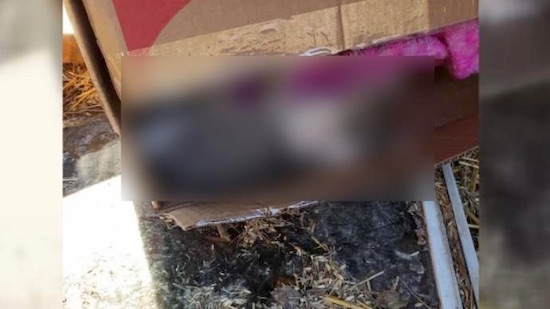 RECENT PICTURE SHOWN ON LOCAL MEDIA OUTLETS THAT HAD TO BE BLURRED DUE TO BEING TOO GRAPHIC TO BE DISPLAYED COMPLETELY, OF KITTEN THAT WAS FROZEN TO DEATH AFTER BEING DUMPED OUTSIDE LOCAL ANIMAL RESCUE SHELTER IN THE EARLY ( AND VERY COLD) HOURS OF THE MORNING

INEZ, KY. — A recent worrying and worsening trend of animals being dumped outside a local shelter has taken a deadly turn involving a small young animal.

A Martin County animal shelter spokesperson says that dogs and cats are being left outside their doors at all hours of the night lately in the recent bitter cold. On this past Sunday, it led to the death of a kitten.

One of the shelter’s volunteers, Cynthia McGinnis, left Stray Hearts Animal Rescue near Inez at around 2 A.M. Sunday morning, November 11, and returned that afternoon to find a kitten frozen to death inside a box.

“It was soaking wet and frozen, the temperature was so cold, the kitten that young; it would not have taken it five minutes to become incapacitated and it has laid there and froze to death,” McGinnis said.

Ms. McGinnis believed the kitten was about 10 to 12 weeks old. Temperatures overnight Saturday into Sunday morning in the local area were well below freezing, dropping to the low 20s for nearly 10 hours.

Cynthia McGinnes said that the temperature at the shelter when she left was 24 degrees.

McGinnis says people are constantly dropping off animals in the middle of the night  recently, and while the animal shelter is constantly battling being overcrowded, she said they would never turn an animal away.

Ms. McGinnis urges people to wait until morning or to call the shelter, instead of making a desperate dump overnight.