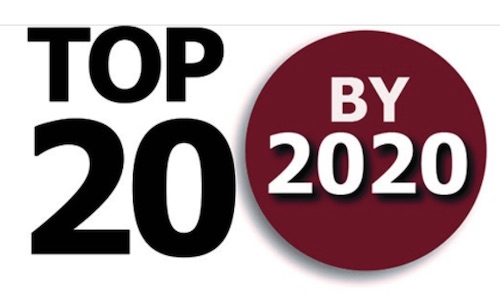 Kentucky’s educational progress is tapering off or, in some cases, declining, according to a new Prichard Committee for Academic Excellence report.

Kentucky initially improved in many of the 19 areas after the “Top 20 by 2020” report’s 2008 inception. Now, that growth has mostly stagnated, making it appear unlikely that Kentucky will become one of the top 20 states for a number of education metrics in time for the education-focused nonprofit’s goal of 2020.

“We recognize that this is an ambitious agenda, but Kentucky cannot wait any longer to take the actions needed to put us back on the right course,” Brigitte Blom Ramsey, executive director of the Prichard Committee, said.

Kentucky’s education system has been “in a near constant state of churn” for most of the decade, making it “imperative” for state leaders to stabilize the system in order to improve, Ramsey said while presenting the findings before a panel discussion Monday.

Council on Postsecondary Education President Aaron Thompson said the state’s leaders have “sung the tune” of improving education, but they haven’t done it in unison.

Sadiqa Reynolds of Louisville Urban League said she was unsure how someone could read the report and not think education systems in the state need more money to improve and compete.

“This isn’t time for us to play nice in the sandbox,” Reynolds said.

One of the biggest areas of concern: Preschool enrollment. Kentucky slipped 17 spots since 2008, landing at 41st with 41 percent of the state’s three- and four-year-olds enrolled in any form of preschool.

Not attending preschool can have a negative impact on kindergarten readiness, making it difficult for students to catch up academically.

One of the Prichard Committee’s biggest concerns: A decline in preschool enrollment.
Leaders have to communicate the value of preschool to parents and the community to boost enrollment and preparedness, Thompson said.

But in some spots in the state, including Jefferson County, there may not be enough seats for all preschoolers, Reynolds said. It doesn’t matter how much parents understand the value of early childhood education if it isn’t accessible, she argued.

The Prichard Committee outlined seven ways to act on the report to boost progress, including increasing state investment in early childhood education.

The impact of state cuts to higher education funding is clear in the report, with Kentucky’s rankings for funding and the share of it paid by students both slipping.

In 2010, Kentucky was the 12th best state for higher education funding. It is now 30th. Colleges need to spend nearly $2,000 more per student to hit the top 20, according to the report.

With less funding from the state, students and their families’ tuition dollars make up around half of the university revenue in Kentucky. To hit the top 20, that figure would need to drop around 3 percentage points.

New high school graduation requirements, which many experts agree will cause a dip in the state’s top 10 graduation rate, won’t affect the 2020 report as they don’t fully go into effect until the class of 2024.

Three other higher education indicators — the number of bachelor’s degrees, college graduations and the number of STEM degrees — are improving slowly but are unlikely to break into the top 20.

Eighth-grade test scores fell into the red, ranking in the bottom half of all states for both reading and math National Assessment of Educational Progress (NAEP) tests. Reading results are especially worrying, dropping from 19th to 31st in two years.